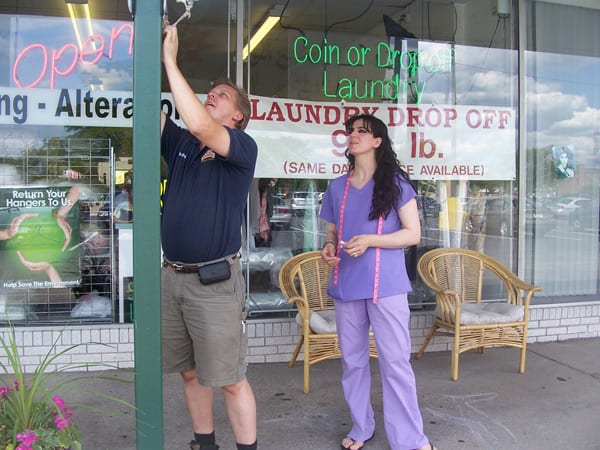 Photo by Sherri Kolade
Tim Rice (left) fixes a sign in front of the laundromat he owns with his wife, Salwa Aboubakr Rice, watching him.

By SHERRI KOLADE
Times-Herald Newspapers
HEIGHTS — Ninety-nine brown wooden prayer beads, Masbaha, hang on a string against a wall inside the front of Crestwood Laundromat and Alterations, 2245 N. Beech Daly.

The beads sit just before a row of washers on the right side and behind the front counter near the door.

Shop owners Tim and Salwa Aboubakr Rice, both 41 of Dearborn Heights, proudly display touches of Islam’s influence in their lives throughout the store with fliers of local Muslim conferences and literature stacked along the counter.

Often playing on their television is a Muslim Channel showing followers of Islamic Prophet Muhammad circling Mecca, one of three Muslim holy cities.

The couple married six years ago and will celebrate their sixth Ramadan this year.

Ramadan is the ninth month of the Islamic calendar. The month in which it is held can fluctuate depending on the year.

“People don’t understand why we do what we do,” Salwa Aboubakr Rice said. “But Ramadan is the month of mercy. Too much love. We all have to direct ourselves to one direction, one point … we have to do it in a certain way.”

“It was kind of hard because he was not used to it,” Salwa Aboubakr Rice said of her husband. “He tried very hard and he missed some days and he did good on some days, but it was tough for him … but every year he is encouraged. Every year he will do more and more. But it is hard.”

The couple have two children together, Umar, 3, and Fatimah Al’Zhara, 5, and Salwa Aboubakr Rice has two teenagers, Moiead Charawi, 17, and Mahamad Charawi, 18, from a previous marriage.

Tim Rice said that before he met Salwa Aboubakr Rice he was in the process of converting to Islam while at University of Michigan-Dearborn in 2005-06, but meeting his future wife sped up the process.

“I converted to Islam because I was raised Lutheran,” Tim Rice said. “That helped prepare me to worship God.”

Tim Rice added that the Lutheran Church was a stepping stone he used in his spiritual walk to become a Muslim. He felt the church didn’t answer all of his questions, such as why he had to pray to Jesus to get to God, he said.

“It never made sense to me in (the) Lutheran Church,” Tim Rice said. “I don’t reject Jesus and his teachings … but I converted because I reject the idea that I have to pray to a man to get to God in the Christian religion. I converted to Islam because Islam is the only religion accepted by God on the day of judgement.”

Salwa Aboubakr Rice, who lived in Philadelphia in 2006 when they were to marry, said her husband was ready to convert and they were married in the city in 2006.

“He came to the imam, he talked to him, he converted right there and we had to get married in front of the court and with witnesses,” Salwa Aboubakr Rice said.

During the month-long period of Ramadan, every night Muslims break the fast in the evening with a process that begins with prayer, drinking water and having a meal, Salwa Aboubakr Rice said.

“The way we break our fast in the evening is so important,” she said.

The message behind Ramadan, Salwa Aboubakr Rice said, which includes bearing witness to God and staying pure, also is important.