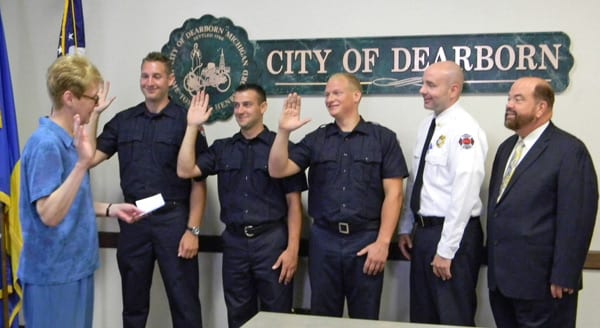 DEARBORN – The Fire Department promotes career exploration for local young people, as well as future employment opportunities, through its Cadet Program and other efforts.

Probationary Firefighter Matthew Bajjey, 25, has taken advantage of those opportunities. A lifelong Dearborn resident, he is the third generation of Bajjeys to join the department.

He attended Schoolcraft College Fire Academy and the Michigan Academy of Emergency Services. He earned certificates or licenses in Firefighting I and II, Hazardous Materials Operations and Awareness, and EMT and Paramedic training.

Probationary Firefighter Timothy Duda, 21, also is a lifelong Dearborn resident who always aspired to be a Dearborn firefighter. He took the positive steps to fulfill his ambitions, including participating in the Cadet Program.

Graduating from Edsel Ford High School, he earned an associate’s degree in the Firefighting/Paramedic program at Henry Ford Community College and achieved Firefighter I and II certifications from Oakland Community College. He also has worked for a private EMS firm as a paramedic.

Probationary Firefighter Matthew Allen Ferrell, 26, another lifelong resident, volunteered with the Cadet Program for more than five years and is following in the footsteps of his brother Adam, who is also a Dearborn firefighter.

He earned certifications or licenses in Firefighting I and II, Hazmat I and II and as an EMT/paramedic.