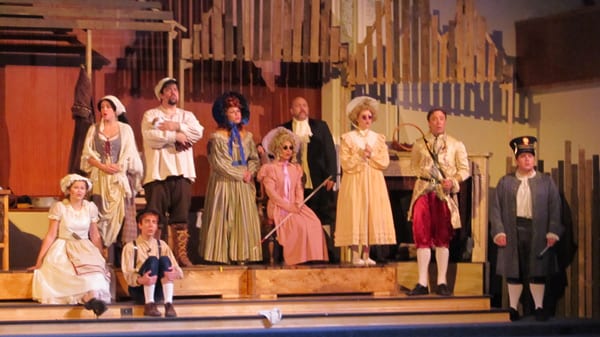 The AKT Theatre Company presents Sondheim and Lapine’s fairy tale-themed musical “Into the Woods” now through Aug. 11 at the AKT Theatre Company, at the Wyandotte Arts Center, 81 Chestnut Street. Sarah Mikota (left), 16, of Lincoln Park plays Little Red Riding Hood, with Sarah Noble, 17, of Wyandotte as Cinderella, Matt Miazgowicz, 20, of Dearborn as Jack and Jeremy St. Martin, 32, of Wyandotte as the Baker. Jamie Clemons (fifth from left), 29, of Trenton portrays Cinderella’s stepmother, with Kayla Smith, 17, of Wyandotte as Stepsister Florinda, Michael Clemons, 38, of Trenton as Cinderella’s father and Mindy Padlo, 18, of Dearborn Heights as Stepsister Lucinda. Brian Welch (ninth from left), 37, of Dearborn performs the role of Cinderella’s prince and Jordan Fritz, 20, of River Rouge is the steward. For more information, go to www.akttheatre.com.

By SUE SUCHYTA
The AKT Theatre Project in Wyandotte is scheduled to present a talented, high-energy rendition of the Stephen Sondheim and James Lapine musical “Into the Woods” now through Aug. 11 at the Wyandotte Arts Center at 81 Chestnut Street, with 7 p.m. Friday and Saturday shows.

At Wednesday’s tech rehearsal before its Aug. 3 opening, all signs pointed to a musically inspiring, enjoyable experience.

Directed by AKT artistic director and founder Angie Kane Ferrante, 27, of Wyandotte, the intimate theatre at the Wyandotte Arts Center offers the perfect setting to stage the Sondheim musical, which won three Tony Awards, including Best Score and Best Book in 1988, the same year “Phantom of the Opera” was nominated.

“Into the Woods” brings familiar fairy tale characters to life in an irreverent fable that reminds us while it entertains that even when dreams and wishes come true, life doesn’t always end up with a “happily ever after” – and it may not even be what’s best for us.

Three subplots intertwine with entertaining twists: Cinderella and her prince, Jack with his cow and magic beanstalk, and a baker and his wife who want a child but are under a curse cast by an angry witch.

Little Red Riding Hood, Rapunzel, her prince and other characters weave their way into the plot as well.

The company keeps the show moving quickly and fills it with energy.

Sarah Mikota, 16, of Lincoln Park, displays her spunky talent as Little Red Riding Hood, a young girl who discovers that “nice is different than good,” and that straying from the path, while tempting, has consequences.

Adults may draw their own conclusions about her encounter with the Big Bad Wolf, played by Don Corbin, 29, of Allen Park, who personifies the “animal” mothers warn daughters about.

Another Sarah in the spotlight, Sarah Noble, 17, of Wyandotte, is a delightful Cinderella. Her character also has challenges with men, as she narrowly escapes the amorous pursuit of the prince until she allows herself to be caught when the proverbial “shoe fits.”

The Baker and his wife, played by Jeremy St. Martin, 32, of Wyandotte and Meg McCormick, 33, of Southgate, work well together and present a likable, believable and strong pair of protagonists.

Rob Eagal, 59, of Trenton, is entertaining as the mysterious man, popping in and out of trees offering rhymed advice.

The princes, played by Brian Welch, 37, of Dearborn and Brad Miller, 26, of Wyandotte, a pair of medieval playboys, are at their best during “Agony,” a song which in both acts accentuates and satirizes their amorous aspirations and frustrations.

Leah Paige Cooley, 42, of Lincoln Park, is tremendous as the powerful witch who inadvertently barters her real power for youth and beauty – which is not the asset she hoped it could be. The role provides a wonderful platform for Cooley’s strong acting ability and her powerful and beautiful singing voice.

The entire cast is an asset to the show, from the entertaining stepsisters you love to hate to the unseen actor schlepping around in a cow suit portraying Milky White.

Cal Schwartz’s costuming ability is epitomized by Cinderella’s stunningly beautiful and richly appointed ball gown, which he made. You’ll also be amused by his creative use of wolf skin to replace Red Riding Hood’s cloak of innocence.

Angie Kane Ferrante’s set design works well for an intimate arena in which the audience faces each other on opposite sides. Her use of wooden walkways and rough netlike fabric is both symbolically and artistically appealing.

Harley Miah’s lighting design makes the magic happen on a non-traditional stage with a swiftly moving story, which it ably facilitates.

Chris Chavez as the musical director makes the magic happen with a strong cast and a real orchestra (as opposed to recorded music), which lets each new audience fall in love with the magical score that beat out “Phantom of the Opera” for a Tony the year it debuted on Broadway.

So save your wishes for an opportunity to travel “Into the Woods” with the talented and high-energy company of the AKT Theatre Project for a delightful evening of happily ever after and enjoyable stage magic.