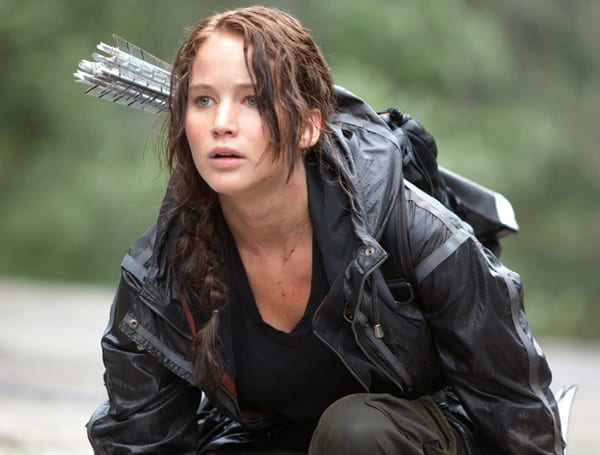 PICKS OF THE WEEK
“Hunger Games” (PG-13) — For those new to this, Hunger Gaming involves putting children into an arena full of weapons and traps, then making them fight to the death. It’s the dystopian future, you see, and the ruling district demands that each of the outlying districts give up one boy and one girl to the Hunger Games. Katniss (Jennifer Lawrence) is a 16-year-old girl who happens to be an expert archer thanks to her hunting experience.

For an action-centric adaptation, it fumbles with the action but does a good job with the chemistry between Katniss and Peeta, her tribute. It’s an odd kind of tension between two teenagers who realize that only one of them can survive, and it works.

“The Raid” (R) — Their cover blown, a handful of police are trapped in a slum high rise teeming with thugs, goons and lowlifes readying themselves for war. It’s up to a rookie on the SWAT team to use every ounce of strength to rescue his comrades and complete the mission. This Indonesian import is a towering inferno of action. If Karate and Kung Fu no longer do it for you, Indonesia has its own traditional martial art. It’s called Pencak Silat, and it looks awesome on a movie screen.

“Tonight You’re Mine” (R) — This romantic comedy is horribly contrived at the start, but becomes charming over time. A scuffle backstage at Scotland’s biggest music festival ends with two preening rockers handcuffed together. Wouldn’t ya know it, they start out hating the situation, and end up falling in love. If you can handle the silly plot mechanism — and all of the dirty music festival people — you have a chance at enjoying this movie.

DOG OF THE WEEK
“Hick” (R) — By all accounts, this should have been a really good movie. The director, Derick Martini, showed hints of skill in his last movie (“Lymelife”), the cast is good, and the script was written by the author of the book that was being adapted. Alas, “Hick” is tough to watch and doesn’t have much payoff.

Luli (Chloe Moretz) is all of 13 years old when she leaves her drunkard parents with nothing but some cash and a handgun in her purse. She meets a creepy cowboy named Eddie (Eddie Redmayne) and a vapid cocaine-addicted young lady (Blake Lively.) From there, Luli just keeps running into the same people and in worsening circumstances. We don’t get any true glimpse into her character or anything meaningful. Just oodles of creepiness.