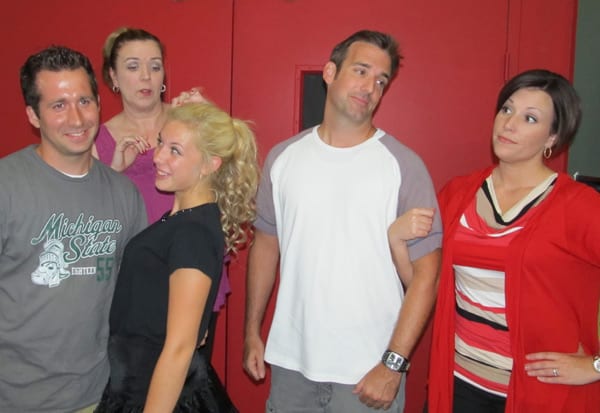 Photo by Sue Suchyta
Alexa Mertz (third from left) of Lincoln Park will play Elle Woods in the Downriver Actors Guild production of “Legally Blonde – The Musical.” Also in the recently announced cast are Mike Hall (left) of Lincoln Park as Emmett Forrest, Carol-Ann Black of Southgate as Paulette Bonafonte, Leo McMaster of Rockwood as Warner Huntington III and Lara Keathley of Southgate as Vivienne Kensington. The show will run for two weekends, Nov. 9 to 11 and 16 to 18 at the Out of the Box Theater, 1165 Ford Ave. in Wyandotte. For more information call 313-303-5269 or go to www.downriveractorsguild.net.

By SUE SUCHYTA
It’s out of the box: for Downriver drama, head to the Downriver Actors Guild home stage for a “Lost in the ’50s” fundraiser at the Out of the Box playhouse, in Wyandotte. The group also recently announced the cast for “Legally Blonde – The Musical,” which will run for two weekends in November.

In Dearborn, student actors at Henry Ford Community College channel the humor in Christopher Durang’s one-act plays to show how laughter is a sure cure for life’s stressful insanity.

‘LOST IN THE ’50s’
The Downriver Actors Guild presents the musical revue “Lost in the ’50s” through Aug. 19 at the Out of the Box Theater in Wyandotte.

The show, a fundraiser for the group, features a live band. It also promises two hours of toe-tapping fun as the performers present hit songs and popular dance steps of the decade.

The show will run Nov. 9 to 11 and 16 to 18 with 7:30 p.m. Friday and Saturday performances and 3 p.m. Sunday matinees. There will also be an evening performance the closing Sunday.

Performances will be at the Out of the Box Theater, at 1165 Ford Ave. in Wyandotte. For tickets or more information call 313-303-5269 or go to www.downriveractorsguild.net.

Tracy Ann Glover of Toledo, Ohio, joins the team as the musical director, with Kayla Aue of Taylor creating the choreography and Peggy Partrich of Lincoln Park producing the show.

Connors said he was eager to do an upbeat show after recently directing “Extremities,” which he described as a downer.

“Going right into such an upbeat, positive show is just a blessing,” Connors said. “The music in the show is amazing. It is just fun. It is one of those shows where you come in and actually get the songs stuck in your head and you walk out singing.”

The show, which debuted on Broadway in 2007, received seven Tony Award nominations, including one for Best Original Score.

“That is don’t judge people by what you see – look at the person inside,” Connors said. “And that is such a great positive message … it builds tolerance.”

Alexa Mertz of Lincoln Park will play Elle Woods, a bubbly blonde who applies for and wins a spot at Harvard Law School ostensibly to win back her boyfriend.

Mertz said she brings her own spunky personality to the part.

“There is so much more to (Elle) than what meets the eye,” Mertz said. “She’s very personable.”

“He expects the world to be handed to him,” he said. “He’s got things set in his mind … and (Elle) just doesn’t quite fit in for him at that point in his life. So at the beginning of the show he breaks her heart and it kind of forces her into her scheme to follow him off to Harvard to win him back.”

Keondre Ari Bynum of Taylor and Charlene Bauer of Woodhaven complete the chorus.

HFCC DURANG FESTIVAL TAKES ON LIFE’S LUNACY
Have you ever hung on to your sanity by a slender thread when witnessing the irrational craziness of friends, strangers or family members?

The Henry Ford Community College theater department feels your pain and offers a balm: The Durang Festival, a collection of one-act comedies that show laughter can be the best medicine.

The festival runs Aug. 16 to 19 and 23 to 26, with 8 p.m. performances Thursday through Saturday and 2 p.m. Sunday matinees in Adray Auditorium in the MacKenzie Fine Arts Center, 5101 Evergreen Road in Dearborn.

For more information, go to www.hfcctheatre.org.

From a frustrating visit to the Department of Motor Vehicles, to an unwanted conversation with a stranger in park, four funny scripts take iritating everyday encounters and find the humor within.

“Durang has a unique talent for capturing common life events … and then allows these events to unfold through a level of dark humor and absurdity,” director Karen Brehmer said. “If we look for it, we’ll find relief in that laughter.”

In “DMV Tyrant,” a customer with an expired license, played by Miekyle Turner of Detroit, finds the DMV service representative, played by Natalie Pares of Dearborn, to be less than helpful.

“Christopher Durang’s motivation for this piece stems from his own absolute disgust… at having to visit the DMV for any reason,” assistant director Jamie Pappas of Wyandotte said.

In “Wanda’s Visit,” a couple whose marriage is already under stress are visited by the husband’s former high school girlfriend. She takes the concept of an unwanted houseguest to new levels.

“Take comfort in the fact that, at the moment, you are not making up the guest bedroom for a person who can only be described as a hot mess and is making eyes at your husband,” Brehmer said.

In “Women in a Playground,” two mothers with young children encounter an awkward conversation that accentuates their widely disparate personalities.

Turner, assistant director, said that Durang, who was teaching acting at the time he wrote the piece, created the show ambiguously. The actors can perform it humorously or seriously, depending on their interpretation.

The final Durang offering, “For Whom the Southern Belle Tolls,” is a parody of Tennessee Williams’ “Glass Menagerie.”

Turner explains that Durang both admired Williams but felt his plays were overexposed.

The cast includes Chahine as Amanda, Pappas as Lawrence, Judo Manko of Detroit as Ginny and Lee Andrews of Dearborn as Tom.

“Multiple moments in these four plays are genuinely entertaining,” Brehmer said. “Durang offers a level of relief to his audience by allowing his characters to say perhaps what the rest of us are feeling.”