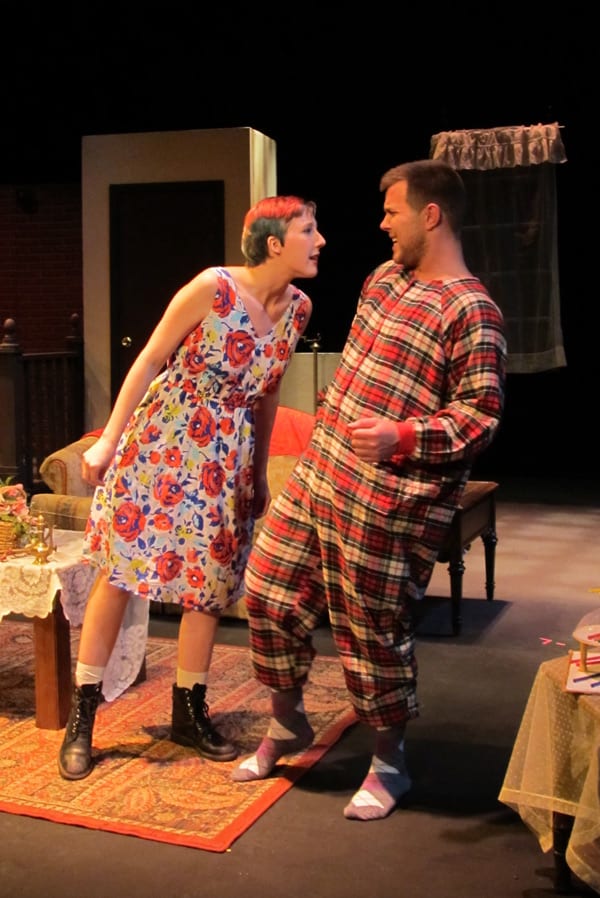 Photo by Sue Suchyta
Judo Manko (left) of Detroit as Ginny and Jamie Pappas of Wyandotte as Lawrence interact in Christopher Durang’s one-act comedy “For Whom the Southern Belle Tolls,” a parody of Tennessee Williams’ “The Glass Menagerie.” The Henry Ford Community College Durang Festival runs until Aug. 26 with 8 p.m. shows Thursday through Saturday and a 2 p.m. Sunday matinee. For more information, go to hfcctheatre.org.

By SUE SUCHYTA
A summer sleeper comedy in the wings at Henry Ford Community College is sure to make you laugh out loud – the theater department’s Durang Festival, which features four of the playwright’s irreverent and entertaining one act plays.

General admission is $12 for adults and $10 for students. For more information, go to theatre.hfcc.edu.

He may not be a household name, but American playwright Christopher Durang writes funny and irreverent comedies with which people can identify. His work has earned him nominations for both a Tony Award and a Pulitzer Prize for drama.

The HFCC student actors find the humor in life’s stressors and take it to the stage, showing laughter to be a welcome diversion from life’s everyday stress.

Directed by Karen Brehmer, The quartet of comedies includes “DMV Tyrant,” “Wanda’s Visit,” “Women in a Playground” and “For Whom the Southern Belle Tolls.”

“Durang has a unique talent for capturing common life events … and then allows these events to unfold through a level of dark humor and absurdity,” Brehmer said. “If we look for it, we’ll find relief in that laughter.”

‘DMV TYRANT’
In “DMV Tyrant,” Miekyle Turner of Detroit plays a man whose driver’s license expired prematurely because of a typo. However, the DMV service representative, played by Natalie Pares of Dearborn, while cheerfully acknowledging the typo, just as gleefully refuses to correct it.

Turner’s expressiveness and mounting frustration are fun to watch – especially when the audience is vicariously pleased not to be in his shoes.

Pares is delightful as the inane and unbending bureaucrat we all dread encountering, from her perky cheerfulness to her glee in worshipping at the altar of meaningless rules.

Pares is perched on high at a counter that is both symbolically and physically formidable. The quirky humor in the set decoration is a nice touch as well.

In between each one-act play the stage crew perform well-choreographed, rapid set changes with remarkable efficiency and skill, with the whir of a battery operated power tool and the footfalls of the dark-clad crew the only sounds you’ll hear.

‘WANDA’S VISIT’
In “Wanda’s Visit,” a man’s former high school girlfriend crash lands in the quiet home of a husband and wife and tests their patience and hospitality with her multiple dysfunctional layers and unpredictable agenda.

More than a comedy of manners, it takes the concept of an unwanted houseguest with hidden motives and shows what polite people will put up with before they literally start to bang their heads against the wall.

Company veteran Amanda Chahine of Dearborn Heights as Marsha, the unwitting hostess, is entertaining, from her express face to her droll delivery. Neophyte James Barton as her husband Jim holds his own as the spineless husband.

However, Redford Township resident Courtney Butterfield’s portrayal of Wanda steals the show. From the moment she bounds on stage in bright colors literally from head to toe, she begins a non-stop litany of disastrous life-choices and ill-advised future schemes.

In a cameo appearance, VicAngelo Offutt of Detroit is entertaining as the waiter, with his own brief but irreverent aside. Jamie Pappas of Wyandotte and Miekyle Turner of Detroit are spot-on funny as the “men in black” who cartwheel into the end of the scene like extras from a mayhem commercial to steal back the temporary insanity from Jim and Marsha’s lives.

‘WOMEN IN A PLAYGROUND’
Have you ever regretted sitting next to another parent whose personality and parenting approach was vastly different from your own?

Monay’s character, dressed severely in black, ignores her child while hiding behind a book that tells people how to find happiness.

Jackson’s perky personality bounds into the scene with an effusive manner and bright colors, invading the other’s personal space and launching an unwelcome upbeat conversation.

Both women deliver characters that make us recognize our own quirks and those of our friends, capturing genuine chuckles during their brief but memorable moments at the beginning of the second act.

‘FOR WHOM THE SOUTHERN BELLE TOLLS’
Even though he is on record as admiring fellow playwright Tennessee Williams, Durang felt his colleague’s works were over-produced, and Durang pokes fun at him in a “Saturday Night Live”-like skit, “For Whom the Southern Belle Tolls,” in which he parodies Williams’ “The Glass Menagerie.”

Chahine is entertaining as Amanda, a southern matriarch with delusions of grandeur cursed with annoying children and limited means.

Pappas is entertaining as Lawrence, her hypochondriac son who garners many laughs with his imaginary limp, his rapt devotion to his cocktail stirrer collection and his other over-the-top dysfunctional quirks.

Judo Manko of Detroit as Ginny steals the show with her non-stop misheard conversation interpretations and responses, her physical humor and her upbeat if eccentric characterization.

Lee Andrews of Dearborn as Tom has some funny one-liners that you’ll miss if you don’t follow closely, so pay attention when his low-key character gets a word in edgewise.

The Durang Festival is a funny, unexpected end-of-summer treat, close to home and affordable. Tickets are available at the door or by via email at [email protected]