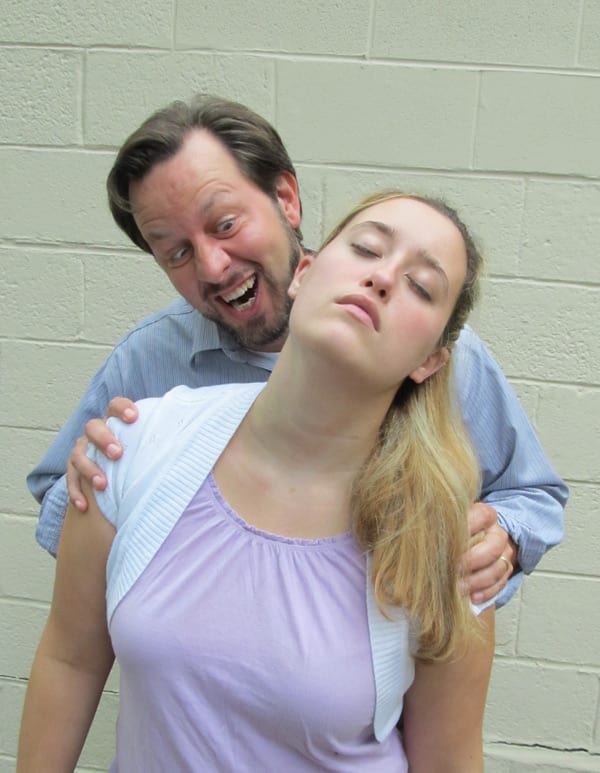 Photo by Sue Suchyta
Tom Varitek (left) of Dearborn as Count Dracula is unable to resist his temptation for Lucy Seward, played by Sydnee Rider of Dearborn. “Dracula” will run at the Players Guild of Dearborn, Sept. 14 to 16, 21 to 23, and 28 to 30, with 8 p.m. Friday and Saturday shows and 2:30 p.m. Sunday matinees. The theater is at 21730 Madison, southwest of the intersection of Monroe and Outer Drive in Dearborn. For more information, call 313-561-TKTS or go to www.playersguildofdearborn.org.

By SUE SUCHYTA
Despite summer sunshine, the Players Guild of Dearborn has turned its attention to the dark side as it rehearses for “Dracula,” its Sept. 14 season-opening show.

Directed by off-Broadway playwright and director Paul Bruce of Dearborn, the thriller stage play by Hamilton Deane and John Balderston, based on the Bram Stoker novel, debuted on Broadway in 1927 – the same year the Players Guild of Dearborn produced its first play 85 years ago. Bela Lugosi starred as Dracula.

The theater is at 21730 Madison, and enjoys the honor of being selected by readers of Hour Detroit magazine as “Best Community Theatre” in its 2012 Best of Detroit competition.

Bruce said although “Dracula” the play is based on the novel, its characterizations and plot twists differ from the original story.

“They’ve taken some license in terms of who the characters are and what they are doing in it,” Bruce said. “It is, however, a wonderfully tight, very sophisticated and very intelligent script that I think people will be very, very pleased with because it raises the tension at all times. And it’s really fun.”

Bruce said there is something in the play for everyone.

“If you are the vampire lover, it’s really cool because it takes you back to the roots of how all the other shows have basically grown from this,” Bruce said. “But if you aren’t really keen on ‘Twilight’ and ‘True Blood’ and all the other series shows that do this, this one is the one for the purist because it appears to be the first adaptation from the Bram Stoker novel to the stage.”

When Lucy Seward becomes mysteriously ill, specialist Dr. Van Helsing suspects she is the victim of a vampire. When Count Dracula’s arrival in England coincides with the onset of dark and mysterious events, suspicions lead to him.

Bela Lugosi played Count Dracula on the Great White Way, a role Tom Varitek from Dearborn will perform during the Guild’s 85th season.

Varitek, who works at The Henry Ford, is pleased to do a play with historic significance.

“It’s the beginning of all of what we now know as Dracula,” he said. “After Bram Stoker’s book, Bela Lugosi played the (stage) role originally. He sort of began people’s public consciousness of what a vampire is. He then went on to play that in the movie.”

Varitek said it is his first opportunity to play a villain on the stage.

“That’s a challenge for me, but I’ve had a lot of fun with it,” he said. “Whether he’s a victim or not, that’s not clear, but at this point he can’t be anything else. He’s almost like a force of nature. He just has to unfortunately feed on people. My read on him is that it’s an impulse that he just can’t control.”

Mike Moseley of Allen Park, who also works at The Henry Ford and who plays Van Helsing, appreciates that the production is the original adaptation of Bram Stoker’s novel.

“When ‘Dracula’ the play first entered into the theatrical world it was unusual,” he said. “It was different. This kind of gothic thriller horror was new to audiences, these vampire stories. And these characters are deep and the true sense of danger that isn’t just physical but that’s beyond that is very palpable in this play. So, you know, I tell folks, ‘This is the original. You want to see the real deal, this is what you want to do.’”

Ken Kilgore of Dearborn, who plays Harker, said that while the show is frightening, he feels that it is acceptable for school-age children, who he feels will not interpret the play the same way adults will.

Others in the cast include Jeff Flannery of Southgate as Dr. Seward and Aric Liljegren of Dearborn as Renfield, an asylum patient.

Sydnee Rider of Dearborn plays Lucy Seward, with Kimberly Elliott of Canton as her maid. Michael Bollman of Dearborn will portray the asylum attendant.

“I am fortunate to have an extraordinary cast of eight people who I know are going to breathe new life into this 85-year-old show,” Bruce said. “We thought it fitting to put the two 85th anniversary entities together.”

The show’s producers are Tim Carney and Kevin Rider, who is also the assistant to the director.

Jeff Bartos is costuming the show, with Anne Suchyta designing and creating original costumes for some of the leads. Mary Ann Denyer will chair props with the producers.

“We are pulling out all the stops in terms of special effects to make this horror/thriller piece as exciting as possible,” Bruce said.

He added that Mike Kinnell and James Mayne have committed to creating and overseeing the sound, light and special effects for the show.

“We’re looking toward doing maybe a personal best here at the Guild in terms of lighting and special effects,” Bruce said. “The show’s requirements are really high. It really asks for a lot in order for the wonderful magic to really happen. We think we have something that will be very slick when it’s done.”

Bruce said there is nothing in the play that is cartoonish.

“Many people have this perception of the vampire because they’ve watched so many ridiculous parodies of it and they find it corny,” he said. “It’s not at all.”

Moseley said he expects audiences to be surprised that the play is set in England.

“We never visit Castle Dracula,” Moseley said. “This is happening right in somebody’s living room and in their chambers. So it’s not castles and things – this guy’s coming into your boudoir – it makes it creepy.”

Bruce, who also designed the set, said the technicians have been working for quite a while to coordinate the lighting and special effects with the blocking and staging to bring the illusions to life.

The Tony Award-winning musical, with script, music and lyrics by Lionel Bart, successfully adapted a Charles Dickens novel, “Oliver Twist” to the stage.

Memorable songs include “Food, Glorious Food,” “Where is Love,” “Consider Yourself” and “Who Will Buy.”

Patrick Reed of Wyandotte plays Dr. Grimwig, with Domingo Guzman of Melvindale as Mr. Brownlow, Kenny Witz of Riverview as Noah and Destiny Frank, 16, of Southgate as Charlotte.