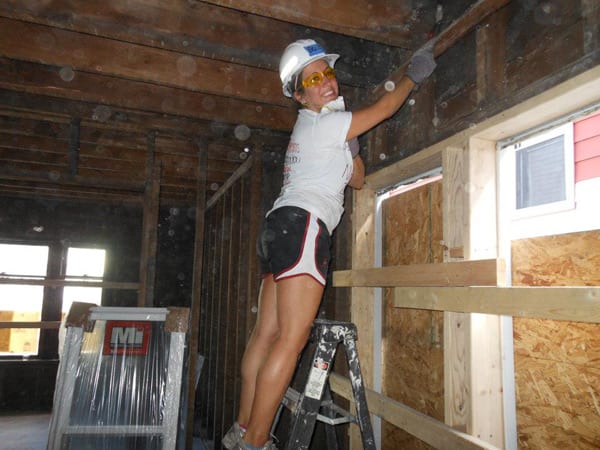 Photo courtesy of Beca Maynor
Beca Maynor, 18, of Allen Park and a member of St. Francis Cabrini Parish, works with Habitat for Humanity in Buffalo, N.Y., this past summer. She helped prepare old homes for new construction through a program of Young Neighbors in Action, part of the Center for Ministry Development that sponsors weeklong, summer service learning experiences for older adolescents in the U.S. that balance scripture, Catholic social teaching, direct service and a justice consciousness.

By SUE SUCHYTA
Sunday Times Newspapers
ALLEN PARK – Beca Maynor said she originally signed up for a weeklong mission trip because she thought spending a week with her friends was a good way to complete her school-mandated service hours.

Instead, she found herself “addicted” to an experience she found to be so amazing, she signed up for mission trips her remaining three high school summers.

Allen Park resident Maynor, 18, a recent St. Frances Cabrini High School graduate, began her freshman year this month at the University of Alabama in Tuscaloosa. Her four mission trips took her to Buffalo, N.Y. twice, and to St. Louis, Mo. and to Chicago through Young Neighbors in Action mission trips with Cabrini parish teens.

Young Neighbors in Action is a Catholic service-learning program supported by the non-profit Center for Ministry Development in Gig Harbor, Wash.

Maynor, who worked on a Habitat for Humanity deconstruction project in Buffalo this summer, said she found tearing out insulation, installing window frames and building a fire wall was different from her past mission trips, where she worked more directly with the people they served in places like soup kitchens.

Habitat for Humanity is an international, non-governmental, non-profit organization devoted to building “simple, decent and affordable housing” for people.

Cabrini parish and high school took 72 high school age teens (from ninth to twelfth grade) on YNIA mission trips this past summer. In Cleveland twenty teens and five adults worked June 24 to 30 at a Cleveland food bank and on a neighborhood painting and cleanup project. Six adults and 31 teens volunteered with a YNIA mission trip group in Buffalo, N.Y. July 15 to 21, and four adults and 21 teens took part July 22 to 28 in a similar Buffalo mission trip.

She said that last summer they had two mission trips that served in different locations, adding that this is the first summer that they traveled to three separate sites with three groups of teens.

She said several volunteers spent two weeks back-to-back in Buffalo working with Habitat for Humanity refurbishing homes.
Tardiff added that some of the teens worked with the Society of St. Vincent de Paul in Buffalo, and some worked at Catholic Charities U.S.A., which works to reduce poverty in America.

Other teen volunteers worked at “Response to Love,” a Buffalo organization that worked with the needs of the poor in the community. The Felician Sisters, who direct and run the program, have a soup kitchen, food pantry, an infant formula program and a thrift shop. They also provide nutritional and other counseling, as well as healthcare and educational guidance.

Another group of Cabrini teen volunteers tended gardens and pulled weeds in a neighborhood with an organization called “Rusted Grain,” comprised of woodworkers in Buffalo who use salvaged wood from demolished Buffalo homes to build furniture, cabinetry and other commissioned pieces. They work with ReUse Action to make new creations from old materials, which makes the organization’s commitment to sustainability actionable.

Darcy Vines, 18, a recent Cabrini graduate and entering freshman at Aquinas College in Grand Rapids, went to Buffalo this summer after working at a summer camp near St. Louis and working with the elderly in Chicago two previous summers. She said she was “hooked” on YNIA after her first mission trip.

She said she now looks forward to participating in YNIA each summer. She said this summer in Buffalo the volunteers worked on refurbishing a Habitat for Humanity house for a family with four children.

Vines said she would encourage other high school volunteers to go on a mission trip.

Allen Park resident David Szczesny, 17 and a junior at Cabrini, said his second mission trip with YNIA, like the first, was a life-changing experience.

He said he loves meeting new people through YNIA, saying it strengthens his faith.

Jordan Powell, 16, a Cabrini junior from Taylor, said working with refugee children at a Vacation Bible School program in Buffalo made him realize the hardships immigrants face, and how comparatively lucky her life has been.

Powell said the experience taught her much about the world beyond his experience, and that she grew as a person.

Domenic Fusco, a Cabrini junior from Wyandotte who attended the Buffalo mission trip this year, worked with immigrant youth from Burma and Africa. He said his second mission trip had an even greater impact on him that his initial experience the year before.

“Last year this trip changed my life, but it had a whole new meaning this year,” Fusco said. “I had a chance to work with kids and it was amazing… they were very accepting and loved us to be there. I had the wonderful opportunity to be the games and activities coordinator. It was great building relationships with kids in such little time.”

Joshua Geschke, 16, a junior from Riverview, said during his volunteer work at the St. Vincent de Paul Society in Buffalo he learned about the enormous amount of work needed to support a non-profit as he worked in their soup kitchen, sorted clothes and did grounds maintenance.

“I learned… the impact on those around… you can be greater than the effort you may put in. This was (an) experience that I will remember for the rest of my life,” Geschke said. “I would highly encourage any other teen to hear their call to serve and take part in a YNIA mission trip.”

Maynor agreed that a mission trip experience is life-changing.

“Mission trips like these will change you,” Maynor said. “They will change your outlook on service, and you will want to be involved with so much more in your community.”