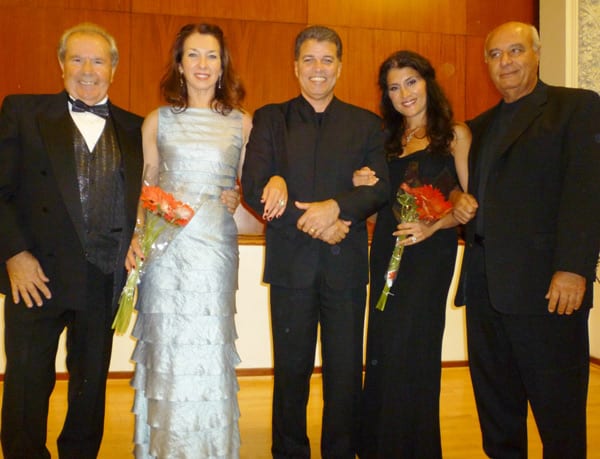 By Evelyn Cairns
One hundred eighty-seven people gathered at the James R. DeSana Arts and Cultural Center, formerly the Wyandotte Arts Center, Sept. 9 to play tribute to Giuseppe Verdi at a concert featuring performances of some of the composer’s best-known arias by four outstanding opera singers.

Taking the spotlight at the concert, titled “Arias in Autumn,” were sopranos Eva Evola and Elena Repnikova, tenor Carlos Seise and baritone Dino Valle, who were accompanied by Neil Eisenstein at the piano.

The performance, which celebrated the 200th anniversary of the birth of the 19th century composer, was presented by the Downriver Council for the Arts in cooperation with the Bellini Opera Theatre as a fundraiser for the DCA.

The concertgoers gathered in the art center’s main-floor gallery after the performance for a reception honoring the vocalists and Bellini Opera Theatre founder Rosolino Lo Duca of Lincoln Park.

In addition to the Verdi arias, the program included works by Bellini, Puccini, Bizet, Gounod, and Tchaikovsky.

The aria “Casta Diva,” from Bellini’s opera “Norma,” was dedicated to DCA board member Norma Wurmlinger, chairman of the fundraiser with Lo Duca, who is also a board member.

Fall Festival of Arts slated
Plans for the annual Downriver Fall Festival of the Arts are nearing completion with a final call for entries in the fine-art juried exhibition and popular holiday boutique by Sept. 21.

The festival will open on Oct. 4 with a reception featuring refreshments, an awards ceremony and entertainment and continue through Oct. 27 at the James R. DeSana Arts and Cultural Center, formerly the Wyandotte Arts Center, 81 Chestnut. Demonstrations by artists are planned for Oct. 5, 6 and 7.

In the fine-art division of the show, the following cash prizes will be awarded: $300, first place; $200, second; and $100 each, third and Artists’ Choice. Six cash awards also will be presented for honorable mentions.

Application forms and additional information are available by going to www.facebook.com/downriverartscraftsguild or emailing [email protected]

WCT will stage musical comedy
The musical comedy “9 to 5,” based on the 20th Century Fox movie with music and lyrics by Dolly Parton, will be staged by the Wyandotte Community Theatre at 7:30 p.m. Sept. 21, 22, 28 and 29 at the James R. DeSana Arts and Cultural Center, formerly the Wyandotte Arts Center, at 81 Chestnut.

Leading roles will be played by Mellissa Lheureux (in the part originally enacted by Parton), Debbie Aue-Delgado, Jami Mullins and Chris Chavez.

For tickets ($15, adults, and $14, students and senior citizens), call the WCT hotline, 734-775-9635. Additional information is available on the website, www.wyandottecommunitytheatre.com.