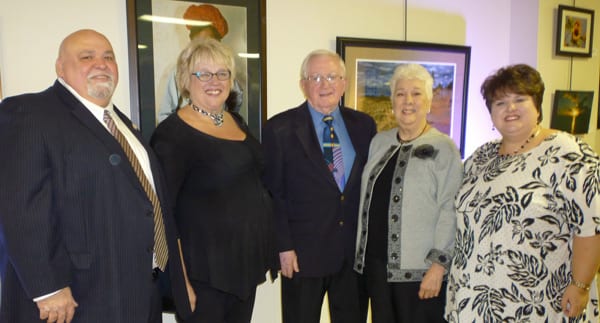 Photo by Evelyn Cairns
James DeSana (center), Wyandotte councilman and former mayor, receives congratulations on the renaming of the Wyandotte Arts Center as the James R. DeSana Center for Arts & Culture in his honor Sept. 14 at a reception following a ribbon-cutting ceremony. Also pictured are Mayor Joseph Peterson (left); Patt Slack of the Downtown Development Authority; Norma Wurmlinger, a vice president of the Downiver Council for the Arts; and Tammy Trudelle, executive director of the DCA, which is headquartered in the building. On hand for the occasion were DCA officers, public officials and family members and friends of the honoree.

By Evelyn Cairns
A symbolic ribbon-cutting ceremony Sept. 14 in the main gallery of the Wyandotte Arts Center officially changed the name of the building housing the Downriver Council for the Arts to the James R. DeSana Center for Arts & Culture in honor of the former mayor of Wyandotte.

The current mayor of the city, Joseph Peterson, paid an affectionate tribute to DeSana, reviewing the honoree’s many contributions to Wyandotte over the last 50 years and DeSana’s determination to save the historic home of the DCA from demolition.

“How lucky we are to have a James DeSana,” Peterson said. “Wyandotte should be named Jamesville,” adding that the honoree never takes credit for anything.

Norma Wurmlinger, a vice president of the Downriver Council for the Arts, a founding member of the organization and a former mayor of Southgate, spoke about her friendship with the honoree since she attended Roosevelt High School and he, St. Patrick’s Catholic, both in Wyandotte.

Wurmlinger said that when she was about to begin her first term as mayor, she asked the experienced public official if he had any sage advice for her.

“We’re here tonight because he made the Art Center happen.”

Also on hand were other public officials and family members and friends of the honoree.

The centerpiece at the reception was a cake decorated with a replica of the James R. DeSana Center for Arts & Culture.

Titanic show will set sail
The opportunity to view “Titanic: The Artifact Exhibition” at the Henry Ford Museum will end Sept. 30. Extended hours the final week of the exhibit, beginning Sept. 24, are 9:30 a.m. to 9 p.m.

More than 300 artifacts are on exhibit in the 10,000-square-foot display, which offers visitors a step back to 1912 while viewing room recreations and learning about passengers with ties to Michigan.

Tickets for the exhibit, which include admission to the museum, are $27 adults; $25, seniors; and $22, youths. Children 4 and younger are free.

For additional information, call 313-982-6001 or go to www.thehenryford.org/titanic.

‘La Cage’ is booked
George Hamilton and Christopher Sieber will appear in “La Cage Aux Folles,” to be staged Sept. 25 through Oct. 7 at the Fisher Theatre.

The play won three 2010 Tony awards, including Best Revival of a Musical.

Tickets ($40 to $80, including parking) are available at all Ticketmaster locations, www.ticketmaster.com and www.BroadwayinDetroit.com.

SOUP dinner is scheduled
The Lincoln Park Historical Society and Friends of the Lincoln Park Farmers Market have scheduled an informational dinner about a community fundraising project titled SOUP for 7 p.m. Sept. 24 at the Ikaros Hall, 1677 Fort St.

Tickets, $5 at the door, will include soup, salad and bread. An informational presentation is planned for 7 p.m. The event is being sponsored by the Lincoln Park Preservation Alliances.