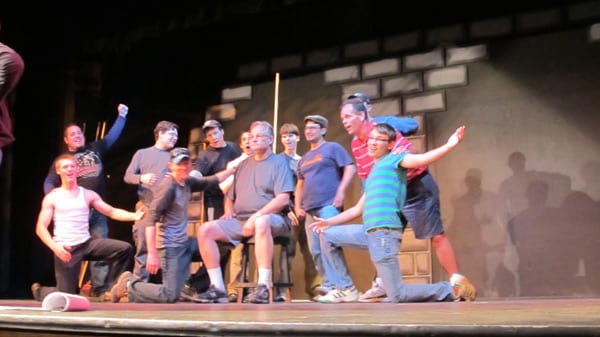 Photo by Sue Suchyta
The Players Guild of Dearborn has cast and begun rehearsals for the second show of its 85th season, “Joseph and the Amazing Technicolor Dreamcoat, the Andrew Lloyd Webber and Tim Rice musical.

By SUE SUCHYTA
The theater season is in full swing as the Players Guild of Dearborn announces the cast of “Joseph and the Amazing Technicolor Dreamcoat,” the Hilberry opens its 50th season with “Mousetrap,” and “Las Cage Aux Folles” runs through Oct. 7 at the Fisher Theatre.

GUILD ANNOUNCES ‘JOSEPH’ CAST
The Players Guild of Dearborn is busy rehearsing the second show of its 85 season, the delightful musical comedy “Joseph and the Amazing Technicolor Dreamcoat.” The show runs Nov. 9 to 11, 16 to 18, 23 to 25 and Nov. 30 to Dec. 2.

Directed by Kim Donovan of Northville and produced by Valerie Haas of Inkster, the show features the choreography of Janeen Bodary of Dearborn Heights and the musical direction of Paul Abbott of Allen Park.

Donovan said “Joseph” is one of her favorite shows.

“I love the upbeat, fun nature of it,” Donovan said. “I like Andrew Lloyd Webber. I like the all music versions of things because there is a lot of singing and dancing and moving and playing.”

She said she plans to incorporate the children’s chorus into more of the action of the play.

“I do believe in kids,” she said. “I think kids can add so much to a production. They’re more talented than anybody gives them credit for, and that’s where they learn.”

She sees the multi-age cast as an advantage.

“The brothers should have some depth to them,” she said. “I like the range. I think it’s great to have Benjamin be young, on the youthful side, and our Reuben is a dad himself, and all the brothers were dads in the Biblical times.”

She encourages people to see the Guild’s unique version of the show.

“If you’ve ever seen ‘Joseph’ you’ve never seen the way the Guild is going to do it,” Donovan said.

The cast includes Brandon Mace of Novi as Joseph and Mark Byars of Garden City as Jacob.

Mace, who is new to Michigan, first played the role of Joseph at the Riverside Center dinner theater in the summer and fall of 2001 in Fredricksburg, Va.

“The show ran five days a week for a couple of months in late summer-fall and we were in the middle of our run when 9/11 happened,” Mace said. “We were dark on the 11th, but knew that we had to get back on the stage because people needed the hope the show provides.”

He said he has an emotional connection to the role that he hopes to once again share with audiences.

“Joseph is one of those unique shows that everyone can enjoy,” Mace said. “Maybe it is the range of musical styles, the colorful way the show is performed, or just a simple story of hope and overcoming adversity that everyone can connect to. If anyone hasn’t seen this show, they need to. I have never, ever met a person who did not enjoy this show.”

Leah Cooley of Lincoln Park and Sydnee Rider of Dearborn share the role of the narrators.

L’Heureux said she is pleased to be reconnecting with Guild members she met during a production of “Fiddler on the Roof.”

She said she is not used to playing a sexy role.

“It’s a whole new character for me since my weight loss,” she said. “I hope to portray the vixen that she was.”

She said she hopes audiences will enjoy the show’s amazing music, story of second chances and the Guild’s talented cast and crew.

Jacob Dombrowski of Dearborn will play Pharaoh in a manner reminiscent of Elvis Presley.

“He’s the king, and everything he does it’s like (the) Michael Jackson of his time,” Dombrowski said. “That’s what I think of people in his stature.”

Jeff Lokken of Livonia will play the Butler, with Steve Nazarek of Westland as the Baker.

Jacob’s sons include Dearborn residents Chris Boudreau as Levi, James Mayne as Gad and Michael Suchyta as Issachar; Livonia residents Tim Carney as Simeon, Jeff Lokken as Naphtali and Dominic Valentini as Asher; Southgate residents Dale Zanardelli as Reuben and Ryan Zanardelli as Zebulun; Steve Nazarek of Westland as Dan; Michael Parks of Taylor as Benjamin; and Inez Hernandez of Ecorse as Judah.

The murder mystery thriller holds the world record as the longest running play, having run for 60 years in London’s West End.

Curtis Green’s set design is stunning, with snow covered trees and a blizzard seen upstage of the beautiful interior set, which features expansive windows and a delightful country inn feel complete with a warming fireplace on the stage apron close to the house.

‘LA CAGE’ AT THE FISHER THEATRE
George Hamilton headlines as Georges in the Herman and Fierstein musical “La Cage Aux Folles,” which runs through Oct. 7 at the Fisher Theatre in Detroit.

The show won a Tony Award in 2010 for best musical revival.

When a young man brings his bride-to-be and her ultra-conservative parents home to meet his father, who runs the La Cage Aux Folles nightclub with his partner, Albin, chaos and comedy ensue when the young man tries to create a politically correct but fictional family for himself.

The show features the wonderful song, “We Are What We Are,” which The Players Guild of Dearborn has used with modified lyrics for years to open and close their summer revues at Homecoming.

Hamilton is timeless and delightful as Georges, while Christopher Seiber is both entertaining and endearing as Albin, Georges’ partner.

The La Cagelles, the nightclub’s drag queens, are amazing dancers and have beautiful and flexible physiques.

For more information, go to www.BroadwayinDetroit.com or www.LaCage.com. For tickets, call the Fisher Theatre box office at 313-872-1000 or Ticketmaster at 800-892-2787, or go to www.ticketmaster.com.