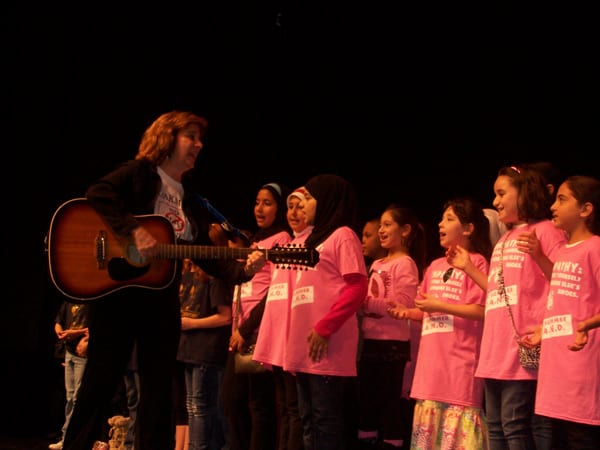 Up With the People
Photo by Sherri Kolade
DPS Music Teacher Jane Lewy (left) plays a guitar while directing dozens of choir members from Long and Oakman elementary schools who sang “Up With the People” during an anti-bullying event Oct. 1 at the Ford Community & Performing Arts Center.

By SHERRI KOLADE
Times-Herald Newspapers
DEARBORN — Hundreds of multicolored crepe paper chains dangled across the balcony and hung throughout open spaces during the Anti-Bullying Extravaganza Oct. 1 at the Ford Community & Performing Arts Center to symbolize Dearborn Public Schools and the city taking a stand against bullying.

“Last year we started our ‘Response to Bullying’ program so that there would be a long-term commitment by our community,” Mustonen said, “so that we could address the issue before it would become a big problem in our community. We are here to reaffirm that commitment. We started something last year and we plan to keep it going.”

Dearborn Public School Board of Education President Mary Lane said by standing against bullying, students and the community can get the message.

“We’ve been working on this for a long time,” Lane said to the audience. “We have to keep repeating the message so we remember it: ‘Say no to bullying.’”

Lane said if students tell an authority figure if they are being bullied action will be taken a lot faster.

During the first act DPS Music Teacher Jane Lewy played a guitar and directed dozens of choir members from Long and Oakman elementary schools who sang “Up With the People,” an original score that encouraged people to take a stand.

Another act included Rudy Hood, “Mr. Rudy,” an “edu-tainer,” who led the audience up on their feet to sing “I Am Smart,” a song dedicated to affirming positivity and high self-esteem in individuals.

Alondra Mireles said she has been bullied before.

“People don’t deserve to be bullied,” she said. “It is not right. I was a bystander before and I found out about (the school program) STAND. (Students Taking a New Direction against bullying) and I thought it would be nice to join against bullying.”

STAND. is organized through a DPS school program.

Eduardo Mireles said his friend once bullied people before.

“I had to tell him to ‘stop and look at what you are doing,’ and he stopped and he looked at what he was doing,” Eduardo Mireles said.

U.S. Rep. John Dingell said during the event that it is important to show people that bullying is unacceptable.

“We will not tolerate it,” Dingell said. “It is much better to be happy by giving happiness to others. The kids have given us a wonderful message that bullying is unacceptable and we are going to make a difference.”

Dearborn Mayor John O’Reilly Jr., proved a point by having audience members who had brown eyes stand up, then blue eyes and green eyes. O’Reilly said everyone is different and by our differences we can recognize a friend in an unfamiliar place. But the differences that make us stand out are the things that bullies often focus on in a negative way.

“(Bullies) pick on people for reasons that have nothing to do with their choices,” O’Reilly said. “If everybody was willing to stand up to the bully the bully would change because the truth is bullies want to be liked (and) they don’t think much of themselves.”

During the event Mustonen announced that this year the district and the city will sponsor a citywide essay contest for students to write about a time someone bullied them, if they were a bully or when they stood up to a bully.