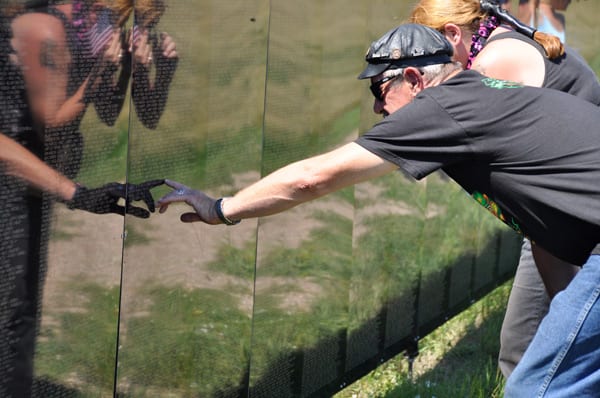 DEARBORN – Jan Scruggs, decorated veteran and the driving force behind the Vietnam Veterans Memorial in Washington, D.C., will be the keynote speaker at the opening ceremony for The Wall That Heals, at 10 a.m. Oct. 25 on the grounds of Ford Motor Co. World Headquarters.

The traveling half-scale replica of the Vietnam Veterans Memorial Wall will be available for viewing by the public around the clock from 10 a.m. Oct. 25 until 8 a.m. Oct. 29. Admission is free.

“The Wall That Heals transcends the Vietnam War to help our great nation renew its relationship with veterans of all wars,” said Scruggs, founder and president of Vietnam Veterans Memorial Fund.

“It helps veterans from all of America’s conflicts to find healing and a powerful connection through their common military experiences,” Scruggs said.

Scruggs was a wounded and decorated veteran of the Vietnam War, having served in the 199th Light Infantry Brigade of the U.S. Army.

In 1979, Scruggs conceived the idea to build a tribute to those who served during the Vietnam War.

He launched the effort with $2,800 of his own money, gained support from other veterans, and together persuaded Congress to provide a location on federal government property. The story of that effort is told in the book and movie To Heal a Nation.

Scruggs continues today as president of the VVMF, the nonprofit organization created to build and maintain the Memorial, now in its 30th year.

Scruggs will see the groundbreaking in November for a companion Education Center to be located near the Vietnam Memorial.

A big part of bringing awareness of the men and women who were lost in the war is the display of the replica Wall coming to Dearborn.

Oct. 25 Opening Ceremony in Dearborn
Tributes, including music, will be provided at the opening ceremony.

Mayor John B. O’Reilly Jr. and Mike Bannister, chairman and chief executive officer for Ford Motor Credit Co. and executive vice president of Ford, will offer remarks. Bannister is an Army veteran and executive champion for the Ford Veterans Network.

Organizers are encouraging representatives from nearby communities to attend and lay a wreath in honor of their residents who never came home from Vietnam.

Organizers and sponsors
In addition to the DAWVC, other supporters of The Wall That Heals Dearborn event include the Ford Veterans Network Group, city of Dearborn, VVA 267, Dearborn Area Chamber of Commerce, Metro Cars, Dearborn Heights Rotary Club, Dearborn Kiwanis Club and Michigan Military Moms A complete list can be found at www.cityofdearborn.org

For those helping, the reasons often are personal.

“I don’t know how I would have survived without the Vietnam vets at American Legion Post 364,” said Tracey Roberts, a director on the Michigan Military Moms board. “I want to thank for them their service and help.

“My son went to war in January 2004. He fought in the Fallujah battle. It was horrible. These Vietnam vets tell me over and over again that they don’t want what happened to them to happen to our sons and daughters.

“When our veterans come home, they help them get into counseling if they need it, help them move and get out of the basement, and assist with financing and VA benefits.

“Vietnam veterans even provide money so Military Moms can ship packages to our soldiers. They step up to the plate. It’s time for us to do the same.”

About the half-scale replica
Since its inception in 1996, more than 2 million people have visited the VVMF’s traveling exhibit.

A museum that tells the story of the Vietnam War, The Wall and the divisive era in American history accompanies The Wall That Heals.

Details for visitors to site
Visitors with smart phones can download one of the Vietnam Wall apps prior to their trip to the Wall. Onsite volunteers will also help visitors locate specific names on the Wall That Heals.

The Wall That Heals is not conducive to rubbing or stenciling names. At the information booth, people may request a name rubbing be sent to them.

They also may bring photographs that can be scanned on site to be preserved at the Education Center.

In addition, mementos left at The Wall will be delivered to the Education Center. Monies donated onsite will be directed to the VVMF.

VVMF education continued through release of book
Lisa Lark, who teaches at Edsel Ford High School and Henry Ford Community College, is working with the VVMF and The Wall That Heals planning committee to provide educational opportunities, including for school children.

In addition, she wrote the official commemorative book to mark the 30th anniversary of The Wall, sponsored by the VVMF. It will be released in November.

She spent two years conducting 500 interviews and collecting mementoes, including photographs, artwork, and letters from Vietnam veterans, friends and families of the men and women on The Wall. Her book profiles the personalities, histories and courage of more than 50 of those who lost their lives.

Public encouraged to visit exhibit
“There are a lot of reasons to be part of The Wall That Heals event in Dearborn,” Smith said. “Most importantly, to help restore the lives and spirits of those who gave so much during the Vietnam War.”