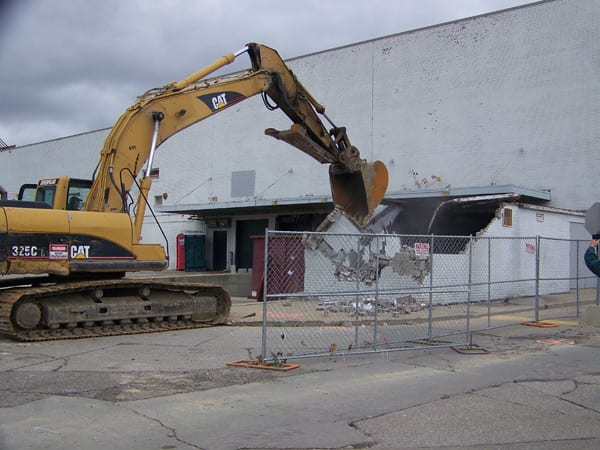 Photo by James Mitchell
Half a century after its opening, demolition of the Montgomery Ward department store began Monday. The 144,000-square-foot building will be razed and replaced with a public gathering spot as the Southgate Shopping Center begins a new era.

For Southgate Mayor Joseph Kuspa, a stroll through the vacant Montgomery Ward building evoked memories of buying a Matchbox car — before Hot Wheels became the “cooler” toy car to own.

The empty space, filled with cracked mirrors and debris waiting to be hauled away, was suitable for what Kuspa called a “stroll down memory lane” before demolition crews began tearing down the former department store Monday.

The hope is that what replaces the Montgomery Ward building — an outdoor gathering area and concert stage in the corner of the Southgate Shopping Center at Trenton and Eureka roads — will create new memories for Southgate families.

Last week’s start to the demolition of the Ward building brought an end to a long search for someone to make suitable use of the property. Ward closed in the late 1990s after decades spent as a community staple.

The iconic merchandiser was the cornerstone of the Southgate Shopping Center that sprang to life in the late 1950s as one of metropolitan Detroit’s first strip malls. A Wrigley’s Supermarket and a Federal Department Store shared the lot with five-and-dime retailers Woolworth’s and S.S. Kresge Co. Over the years local mainstays such as Farmer Jack came and went until the 2000 Christmas season, the last for Montgomery Ward and the beginning of the center’s decline.

Down but not out, building owner Mickey Sisskind attempted to bring another anchor store to the strip to complement a rebirth of the center that included satellite chain restaurants. For several years Wal-Mart was a likely candidate to take over the 144,000-square-foot Ward building, a project that instead opened west of the complex at Eureka and Dix-Toledo in 2011.

A plan to tear down the Ward building was set in January when owner Sisskind made official his intention to donate the land to the city and absorb the costs of demolition, which is expected to be complete in about a month.

“The city will then have two years to create a public space at that site,” Kuspa said. “The issue will remain funding and we’re identifying possible sources and creating a committee of interested stake holders.”

Southgate does not, Kuspa said, have a conventional downtown area, but the center could begin filling that role with the existing stores, restaurants and movie theater.

“It’s difficult to create that sort of gathering space,” Kuspa said. “Once the building is down we’ll see the real potential for a walkable district where people can get something to eat, catch a show, hopefully have a stage area. We’re excited over the possibility and that we have a willing developer who shares that vision.”