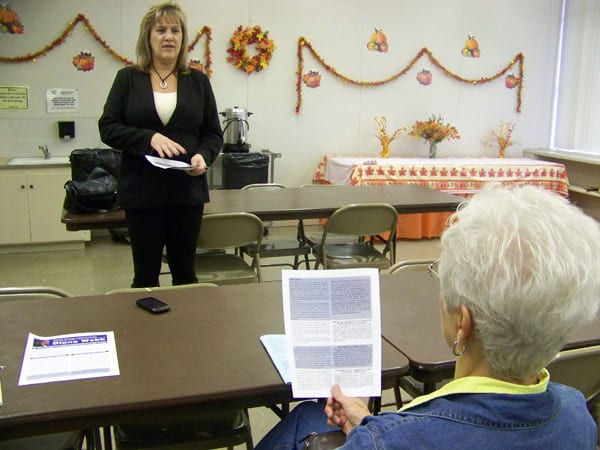 By SHERRI KOLADE
Times-Herald Newspapers
HEIGHTS — Depending on how the votes go, Wayne County residents may see a change in the county charter after the Nov. 6 election.

Webb told the audience that just like state proposals, county charter changes are decisions made by the voters.

“Ordinances or legislation can be (changed) because it is written by a legislative body or it can also be challenged just as easily,” Webb said.

The Wayne County Charter is a county-based governing document for the Wayne County government; voters approved it in 1981 and it been amended by voters six times since then.

The Wayne County Commission, a legislative body for the county, put five proposed amendments to the county charter on the ballot.

One of the proposed amendments is a change to the budget and appropriations format, in which Wayne County residents are asked to give the commission the power to decide the format of the county budget.

If approved, the amendment could give the commission the authority to decide on the budget format; currently the office of the county executive makes that decision.

Webb said some people do not like the proposed amendment.

“The people on the other side of it would say (budgetary items) are an executive function, not a legislative function,” Webb said.

Because the executive branch is responsible for day-to-day operations and functions of the county and proposing the budget is part of day-to-day operations, some people might feel that the commission is overstepping its boundaries, Webb said. Webb said because the commission represents taxpayers they should be allowed to decide on the form of the budget.

Webb also discussed the retirement commission membership. The employee retirement system is currently governed by the Wayne County Retirement Commission, an eight-member board. If approved the proposed amendment would add a ninth trustee, Wayne County Treasurer Raymond Wojtowicz or a designee, to act as a tiebreaker, represent employees of the Detroit Metropolitan Wayne County Airport Authority and pay toward their pensions but not have representation on the board.

Webb said their money and representation should stay in sync.

“Their money is there but they don’t have representation,” Webb said. “This would give them the opportunity for representation on the board.”

Another proposed charter amendment deals with the option to give the governor power to remove the county executive.

Webb said the county executive is not included in the law because when the Wayne County Commission wrote the law, the county was not chartered.

“He didn’t exist. We didn’t have a county executive, otherwise, one would guess that he would have been included,” Webb said. “Right now if the people want to remove the county executive the only way to do it is via a recall. I don’t know of (a recall) that ever succeeded in my lifetime.”

Webb also said by proposing the charter amendments the Wayne County Commission is sending a message to the governor.

“We can’t give the governor power. They have to amend their own state constitution,” Webb said. “By putting it out in front of the people is saying that ‘the people of Wayne County want you to do this,’ so it sends a message to Lansing.”

Another proposed county charter amendment is the of hiring an independent external auditor. Currently the charter says that every eight years the commission has to hire a new auditor to look at the books with a new perspective.

Webb said a lot of the county charter amendment ideas came from necessity.

“A lot of these (ideas) were born out of the last couple of years of information that has been gained,” Webb said. “We see that there are legislative holes that need to be fixed and sometimes it takes (something) for the government to change the rules.”

Also on the ballot is employee compensation approval. Currently the commission approves every union employee’s compensation via a collective bargaining agreement.

Unions come through the commission to have their wage rates approved after the agreements are ratifired by the union.

Webb said the commission has no way of knowing the executive wages or the benefit packages of the appointees.

“This (proposed county charter amendment) will bring transparency and will bring greater oversight,” Webb said. “The people who are against this would say it is an executve function and we (the executive branch) should be able to pay whoever we want.”

Webb said that if the commission does not know the executives wages or benefit packages of their appointees it is a hinderance for the legislative branch.

“That is a blind spot for the legislative branch,” Webb said. “We are trying to open that up and say you can still pick the (employees) as long as we see their resume and they are qualified.”

For more information on the Wayne County Charter Amendment proposals go to www.waynecounty.com/commission/Amendments.htm.