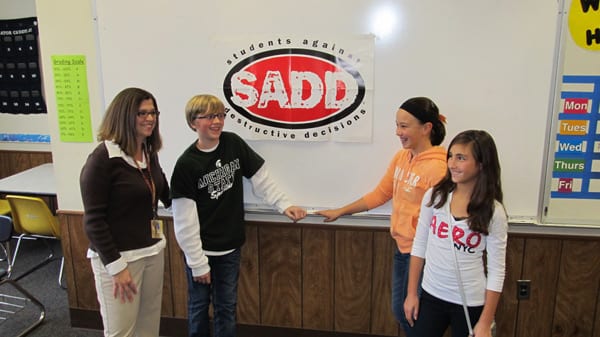 By SUE SUCHYTA
Sunday Times Newspapers
RIVERVIEW – At Seitz Middle School, students are glad to be SADD: they have learned to use positive peer pressure to help their classmates thrive during their middle school years.

For more than 30 years, Students Against Destructive Decisions has helped empower young people with education and prevention programs to address and prevent behaviors and attitudes harmful to students, including substance abuse, bullying, violence and suicide.

Begun in 1981 as Students Against Driving Drunk, SADD broadened its focus in 1997 to include destructive behaviors and actions beyond underage drinking.

Chapter advisor and teacher Julie McClendon said she wants the 25 student SADD chapter members to be role models for their peers.

McClendon said in past years chapter members sold candy canes during student lunch time and donated their profits to a local soup kitchen and to the Make-a-Wish Foundation.

Chapter member and seventh-grader Elena Tyler, 12, of Riverview, said SADD gave her the support she needed to know how to talk to classmates who were troubled or bullied, and to spread the word to other students that help was available.

“I think it helps people to say there’s no reason to hide in the corner by yourself,” Tyler said. “You can speak to people and there are people out there who will accept who you are and be your friend.”

She said she experienced loneliness herself as a new first-grader at Huntington Elementary School. She added that she has seen less bullying at Seitz this year since raising student awareness.

She said SADD helps students understand that they do not have to make poor choices to gain acceptance by their peers.

“I think a lot of people… try to be cool and they try to fit in,” Tyler said. “They run into bad decisions — trying to be cool. (SADD) just helps people spread the word that there are better decisions than drugs and drinking, and people can help you get out of those decisions.”

Seventh grader Maximillian Thomas, 12, of Lincoln Park, said SADD has empowered him because he is no longer a bystander: he helps bullied students.

“I’ll tell the bully person to stop,” Thomas said. “And if when I do that another person sees it, then they’ll do that and it keeps spreading. We want everyone to stop it, and when everyone’s doing that there’s no bullying.”

Thomas said students in middle school experience teasing about many things, including their clothes, how they talk, and whether they are smart or not. He said in elementary school a jealous classmate bullied him because he was smart and got good grades.

He said the school supports positive behavior reinforcement, which encourages students to be responsible, careful and helpful – like if someone has dropped their books, helping them instead of just passing by.

McClendon said that a strong support system is important to students, and that SADD empowers them: it helps them be leaders and spread positive peer values.

Thomas said he joined SADD because he likes being a leader, and he knows what it is like to be a bully’s target.

“It was just hard and I didn’t like it,” Thomas said. “I don’t want other people to have to feel that. It wasn’t fun.”

Tyler said SADD gives students a bigger voice than before. She said it helps them know what to say to a bully, and when to go to an adult for help. She said she also used empathy to try to get a peer to stop spreading rumors about another student.

“I hear rumors in school and I don’t think it is right that they do something like that,” Tyler said. “I told them to put themselves in someone else’s shoes.”

Seventh grader Alexis Ganop, 11, of Riverview said she joined SADD because she likes helping other people and doing things that are “out of the box.”

“I don’t want to be sitting home doing nothing when I could be helping people,” Ganop said. “Since I’ve been in SADD I’ve been more aware of things happening around me.”

She said she hears things at slumber parties “that shouldn’t be coming from a 12-year-old. I don’t think it is right.” She said she hopes to bring up her concerns at a future SADD meeting to get feedback from other members.

Ganop has also noticed a decline in bullying since the school began to take an active role in discouraging it.

“People are starting to speak up more,” Ganop said. “I noticed this year that some students that had been sitting in the corner not talking are now asking more questions and getting more involved.”