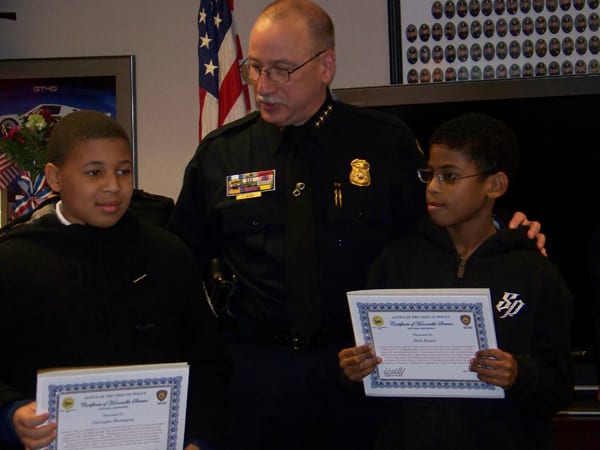 By SHERRI KOLADE
Times-Herald Newspapers
DEARBORN — Police Chief Ronald Haddad gave certificates and praise to four Dearborn youth for their quick thinking that reunited a lost toddler with his mother in July.

Haddad honored friends Malik Roland, 13; Christopher Washington, 12; and brother and sister Courtney Gillespie, 12; and Charles Gillespie, 8, with honorable service certificates Thursday at the Police Department for their acts described by the chief as brave and admirable.

“You should be proud of that and always stand up and show the rest of them how to do it,” Haddad told the children.

The children were playing about noon on July 16 at a condominium complex in the 3200 block of Lindenwood Drive, in the Fairlane Woods area, when one of them saw a 2-year-old toddler walking around the complex with a cell phone and keys in hand. One of the children then stopped and got down to business, attempting to locate the toddler’s mother, Courtney Gillespie said.

“We found the kid walking around and at first we thought the mom or dad were somewhere and we didn’t see anybody,” Courtney Gillespie said after the recognition ceremony. “My first thought was to call the police because that was the right thing to do.”

While the friends looked a bit longer in an attempt to find the parents, they took turns holding and caring for the toddler and then called 911.

Dearborn Police Officer Gregg Allgeier arrived and continued with the children to search for the toddler’s parents and knocked on several condo doors for about 30 minutes until they found the mother.

“They did a fantastic job of telling me where they found him,” Allgeier said at the ceremony. “You parents should be extremely proud of raising these fine (children) and we appreciate the efforts they had serving the community.”

Allgeier said the toddler got out because the front door was open due to a recent painting of all condo doors.

“I don’t want anyone to think that the mother of the lost toddler was a derelict,” Allgeier said. “We checked that out and she was just frightened beyond belief that one of her little ones got out. It is understandable for those of you who are parents, it happens once in a while.”

Allgeier also discovered that the toddler took the mother’s cell phone and keys and she couldn’t call the police to report him missing.

Dearborn resident Summer Gillespie, mother of Charles Gillespie and Courtney Gillespie, said she is beaming with pride at her children’s actions.

“I am very proud that they responded so quickly,” Summer Gillespie said. “If one of them were to get out and they got into the wrong hands, I would really be upset. I am very excited that they did the right thing.”

Charles Gillespie said he is glad he did the right thing and he is glad for the recognition.

“I was happy when they were reunited,” he said of the mother and child.