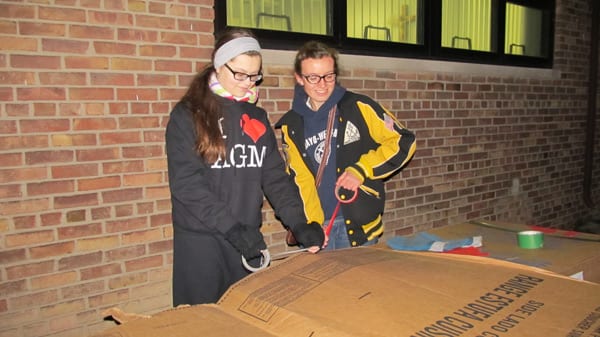 Photo by Sue Suchyta
Lincoln Park resident Sarah Mikota (left), 17, a senior at Wyandotte Roosevelt High School, and Allen Park resident Emily Gibson, 17, a senior at Allen Park Cabrini High School, tape their boxes together before spending the night outside in a courtyard on the Cabrini grounds Nov. 3 to experience some of what homeless people encounter on a nightly basis. About 30 teens from Cabrini and Lincoln Park Christ the Good Shepherd Catholic church parishes took part in the event, despite temperatures in the low 30s.

With temperatures dipping into the low thirties, about 30 high school-age teens and six or seven adult chaperones from Cabrini and Lincoln Park Christ the Good Shepherd parishes spent a recent Saturday night in a Cabrini parish outdoor courtyard, with sleeping bags inside cardboard boxes, to experience the conditions homeless people encounter when they lack basic shelter.

Therese Tardiff, Cabrini coordinator of youth ministry and campus ministry for the high school, said this is the second year the high school age youth group has sponsored a homeless night in a box experience.

The teens also learned about conditions for homeless youth in the metropolitan Detroit area from Mary Jo Hartman, a marketing associate for Covenant House Michigan in Detroit, as well as testimonials from four young adults currently living at Covenant House. Hartman said there are currently about 5,000 homeless teens throughout Michigan.

Covenant House is a non-profit charity providing programs and shelters for homeless youth.

Detroit resident D’Shonda Atkins, 21, who was homeless this year before Covenant House helped her with her immediate needs and long-term plan, came to Cabrini Parish to share her story with the youth group participants and to answer their questions.

She said it is both devastating and horrible not to have a warm place to sleep.

“Your whole inside of your body is like isolated,” Atkins said. “At times you feel like you to have nobody to be around, you’re lonely. You feel like crying out to someone but no one hears you – and it’s just a nightmare.”

Adkins added that Covenant House Michigan is like a home to her, and the staff is helping her become a better person.

She hopes that in the future if the teens see a person in need they will try to help them out to the best of their ability.

Detroit resident DuJuan Jones, 20, who is also getting help from Covenant House, said being homeless is a surreal, difficult experience.

He added that sometimes people are homeless because they age out of foster care, or have nowhere to go.

“It’s not just hard on you – it’s hard on the people around you watch you go through such a time,” Adkins said. “I felt like I was by myself and I was alone.”

He said Covenant House gave him something to hope for and believe in.

Jones said he hopes the teens come to realize that homelessness can happen to anyone, not just to people with limited resources.

“Some people who become homeless had everything,” Jones said, “And they lost it all in one day.”

Tardiff hopes the participating teens will come away from the experience of spending a night outside in a box by appreciating their own lives and will be more grateful for what they have. She hopes they will also understand how many homeless people live every day.

“They’re just going to have one small, little, tiny experience of being cold all night and being in a box for the night,” Tardiff said. “But if they can just gain a little bit more understanding and be a little bit more conscious about how a lot of people have to live every day, maybe they’ll be a little more sensitive next time they see people sleeping in a box or sleeping under a bridge.”

She said if it gives the teens a better understanding and more gratitude for their lives,the program is worth the effort.

“It’s cold, but I kept thinking last year that it’s just one night,” Tardiff said. “And there are a lot of people that have to do this every night.”

She said she hopes to raise people’s awareness about the homeless.

“People that live on the street – they’re not bums,” Tardiff said. “They’re just people struggling. People who have been abused… been hurt… who have lost their jobs and fallen on hard times, and too quickly we judge… people who are on the streets as bums or lazy and that is not always the case.”

Tardiff added that many homeless people are mentally ill or veterans.

Holly Tockstein, youth ministry coordinator at Christ the Good Shepherd parish in Lincoln Park, wants the teens to hear from young adults who have actually been homeless and spent time on the streets. She also wants the teens from her youth group to realize that many people their age do not have all the things that they do, and to feel some of their discomfort.

“To feel uncomfortable, to know what it’s like to feel hungry, to be a little bit cold when they sleep, so that they can kind of be in solidarity with those people who do this all the time,” Tockstein said. “And maybe their heart will be moved… and know that this is something we need to do; we need to help these people… so that they have something. I always like that quote, ‘for us to live simply, so that others can simply live.’”

Tockstein said she is excited that nine of the teens from her youth ministry will participate in the experience.

“Going to a soup kitchen is wonderful, it’s amazing, because you know that you’re helping other people, you see the plight of other people,” Tockstein said. “But when you actually kind of go through it as if you’re one of those people and you’re experiencing it, I think that your whole mindset will change, and so I’m just excited to see how our teens react to it.”

Participant Raymond Smith, 15, a sophomore at Cabrini High School, who also took part in last year’s homeless night in a box event, said it made him realize how blessed he was to have heat, running water and a home.

“It’s a great experience,” Smith said. “You have to do it for yourself… to truly feel (it).”

Richard Page, 16, a junior at Allen Park High School, also took part in the event last year, and said that while he liked spending time with his friends, it was cold, the wind was blowing and he did not get much sleep.

“There’s really nothing like experiencing it,” Smith said. “I’ve read things about it before, listened to presentations, whatever, but you really don’t get that same sense (as) when you are out here in the cold.”

He said he is repeating the experience this year because it is a good reminder of everything life has given him.

“It’s a totally different experience,” Smith said. “It’s sort of like camping but without anything that’s comfortable around you.”

First time participant Emily Gibson, 17, a senior at Cabrini High School, said while she is always up for an adventure, she also thought it would be cool to find out how homeless people live day to day.

“You never realize what someone is going through until you walk a mile in their shoes,” Gibson said. “So it’s really going to help me figure out… what they are going through… If someone else survives like this every day, then I can do it for one night.”