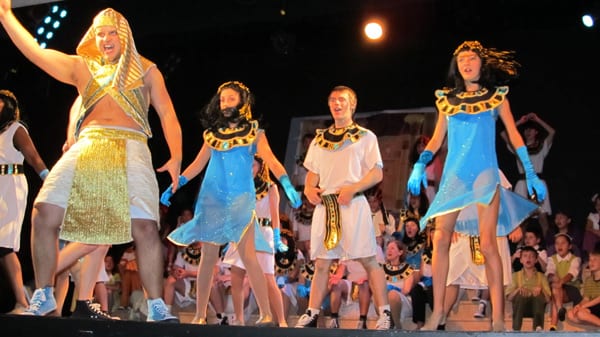 Photo by Sue Suchyta
The Players Guild of Dearborn presents the Webber and Rice musical “Joseph and the Amazing Technicolor Dreamcoat” weekends through Dec. 2 at the Guild theater, 21730 Madison in Dearborn. Show times for the production, which opened Nov. 9, are 8 p.m. Fridays and Saturdays, and 2:30 p.m. Sundays. Tickets are $18, with $2 discounts for students with valid identification and groups of 20 or more. For more information call 313-561-TKTS or go to www.playersguildofdearborn.org.

By SUE SUCHYTA
The Players Guild of Dearborn announced the cast of the Derek Benfield farce “First Things First” Tuesday, with Jeff Bartos of Dearborn directing.

Set in England, the show tells how Pete, whose first wife, Jessica, died in a mountain climbing accident, reacts when she shows up a year and a half later very much alive. Meanwhile, Pete’s best man George tries to keep this startling news from Pete’s current wife Sarah and her domineering mother Margo. Things get more complicated when a passionate Frenchman shows up looking for Jessica.

Lindel Salow of Dearborn plays Pete, with Plymouth resident Andrea Hoglen as Sarah and Margaret Kinnell of Dearborn as her mother Margo.

Matt Ripper of Livonia portrays George, Pete’s best man, with Kathleen McClaine of Detroit as Jessica and Ross Grossman of Farmington Hills as the Frenchman Alan.

Mike Mayne of Redford and Marni Hack of Dearborn will co-produce the show, with Chris Boudreau of Dearborn assistant directing.

TRIPLE TREAT AT WSU
Good things often come in threes, and that is certainly the case at Wayne State University, with “Broke-ology” opening at the Studio Theatre, “Goodnight Desdemona (Good Morning Juliet)” opening at the Hilberry and “The Snow Queen” casting its spell on the Bonstelle stage.

“Broke-ology” at the Studio Theatre (in the lower level of the Hilberry) tells the tale of the poor but close-knit King family, who struggle to survive when the patriarch’s health is failing.

The show, which opened Nov. 15, runs through Saturday.

When graduate student Constance sets out to prove that Shakespeare intended for “Othello” and “Romeo and Juliet” to be comedies, she travels through time to prove her theories, with comic results.

The cast features Chelsea Ortuno as Desdemona, Christopher Call as Othello, Danielle Cochrane as Juliet and Ty Mitchell as Romeo.

David Sterritt plays Mercutio, with Megan Dobbertin as Julie, Brandon Grantz as a soldier, Annie Keris as Ramona, Joshua Blake Rippy as the ghost, Joe Plambeck as a servant and Alec Barbour in the ensemble.

The undergraduate Bonstelle Theatre continues its season with Tyler Monroe’s “The Snow Queen.” Adapted from the Hans Christian Andersen fairytale, the show opens Nov. 30 and runs through Dec. 9, with 8 p.m. Friday and Saturday shows and 2 p.m. Sunday matinees.

When the Snow Queen kidnaps a young boy and takes him to the North Pole, his best friend sets out on a journey to rescue him. The show uses puppets, music and stage magic to take audiences on an enchanted journey.