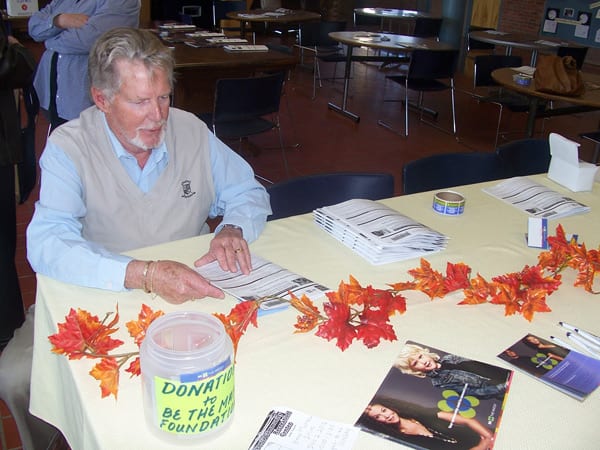 By SHERRI KOLADE
Times-Herald Newspapers
DEARBORN — In February, doctors gave retired Dearborn Public Schools teacher David Gardner some news that was hard for him to swallow

Doctors told the 68-year-old Livonia resident he has MDS leukemia, also known as myelodysplastic syndromes, which are a group of diseases that affect the blood and bone marrow. MDS can be cured with a bone marrow transplant.

Gardner said when he first found out he had MDS he struggled with the reality of having the disease, which “Good Morning America” co-host Robin Roberts also has.

Some types of MDS are mild and manageable, other types are life-threatening and over time mild MDS can develop into a fast-growing, severe leukemia called acute myelogenous leukemia, a cancer that starts inside bone marrow.

“When I was diagnosed at first I guess I kind of had an attitude of, ‘I don’t care anymore about things,’ in general,” Gardner said. “And I don’t feel that way anymore but it is a hard thing to hear that your life expectancy is probably going to be about three to five years.”

Gardner started his career with DPS teaching Social Studies at Dearborn High School from 1968 to 1973. He subsequently taught Social Studies at Adams Junior High School for five years and transferred to Maples Elementary from 1974 to 1980. In 1980, Gardner went back to Dearborn High School as a teacher, in English, Communications, Mass Media, speech and composition, until he retired in 2001. He was also on the Dearborn Federation of Teachers’ executive board for several years.

A handful of people signed up and volunteered by using a bone marrow kit and swabbing the inside of their cheeks, and Be The Match, a national marrow donor program, collected the individuals’ DNA to find out if their marrow matches Gardner’s for a potential bone marrow transplant.

Retired DPS Teacher Darlene Deyonke, who organized the drive, said a lot of people in need will get help from volunteers who donate their DNA at bone marrow drives.

“This volunteering helps many things and it helps all kinds of diseases and cancers, not just for MDS,” Deyonke said. “We’re happy there is a cure but it is tough to get everybody out to volunteer. I think a lot of people are afraid it is going to be more than they want to do, but technology has made it easier.”

Deyonke said Roberts also indirectly helped Gardner and others with MDS by talking about it publicly.

“I think we need more people like Robin Roberts to get the word out and publicize it because they had a big surge of bone marrow volunteers when she was diagnosed,” Deyonke said. “Everybody who volunteered for her is available to everyone else.”

Gardner said even if none of the DNA samples are a match for him, something good will come from the bone marrow drive.

“If we don’t find a donor who specifically helps me chances are it could help someone else,” Gardner said. “The goal is to find matches for people who need it.”

According to The National Marrow Donor Program, the NMDP has more than 18.5 million potential donors.

Currently, Gardner has three potential bone marrow donors his doctors told him about. The three potential donors have a high match criteria, or human leukocyte antigen, which is used to describe protein markers that are found on most of the cells in the body. When a donor and a patient’s HLA markers closely match each other, a transplant has a better chance of working.

Gardner said if he does not have any other potential donors who have a higher matching criteria than the three potential donors, he will most likely have to use one of the donors.

“What (the doctors) will try to do is find the perfect match,” Gardner said. “It doesn’t have to be but that is what the doctors prefer for a bone marrow transplant.”

“The reason I am looking to the future for a bone marrow transplant is because it is the only cure,” Gardner said.

For someone with MDS, chemotherapy treatments work for about two to three years. After that, the body may build up an immunity against the treatment and MDS can turn into acute leukemia, according to www.cancer.org.

Gardner said before anything worsens he hopes to find a “perfect match” and have a bone marrow transplant.

“There is no other way to get rid of it,” Gardner said.

In the meantime, Gardner and his wife of 44 years try to live their lives like everyone else, with a few adjustments in between, his wife, Joan Gardner, said.

“We go sailing and we are able to play golf even though he needs a four- to five-hour nap afterward,” Joan Gardner said. “He is very independent; he needs nobody for anything. But he has been very accepting of the help that he has to have, which is wonderful and it makes me feel good to help him.”

Joan Gardner said the doctors told the couple that a lot of people with MDS aren’t as active as her husband.

“We go to doctors at the Karmanos Cancer Institute (Detroit) and the University of Michigan Medical Center (Ann Arbor) and they both say people with MDS are not sailing and not playing golf and doing the things that he is doing,” she said. “He’s made himself do it.”

David Gardner said he has come a long way in his attitude in dealing with MDS.

“It may seem strange but I’ve had a few conversations with God,” David Gardner said. “He told me everything is going to be OK.”

The Gardner family scheduled a second bone marrow Drive on Dec. 2 at the Livonia Recreation Center.

More information about Be The Match is available at www.marrow.org/Home.aspx.