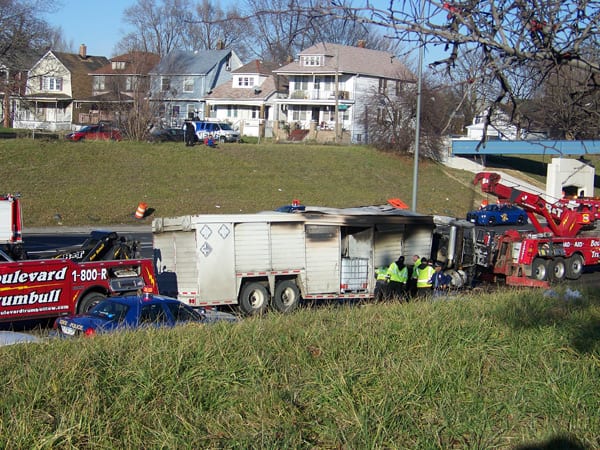 Photo by Sherri Kolade
Michigan State Police officers direct traffic and emergency crews clean up debris from a semi-truck after it exploded on Interstate 94 in Detroit Dec. 12.

By SHERRI KOLADE
Times-Herald Newspapers
DEARBORN — A semi-truck driver on Interstate 94 in Detroit hit a median wall and exploded after driving too close to a car, about 1:45 p.m. Dec. 12, causing concrete to fly over onto the other side of traffic.

The incident, which occurred on eastbound I-94 near Lonyo Avenue, backed up traffic on I-94 for about two hours.

MSP Lt. Michael Shaw said the semi-truck driver drove too close to another vehicle and could not stop in time.

“He was not far enough where he could stop,” Shaw said. “He had to swerve.”

Shaw said that the driver lost control of his vehicle.

Shaw said the driver received a citation for violation of basic speed laws; he did not specify the driver’s speed or how close in proximity he drove to the car in front of him. No one was injured or hospitalized.

According to published reports, the driver of the truck carried containers of cleaning solvent.

Detroit Police Officers Adrian Cargill and Leran Simmons, stationed near an I-94 ramp at Michigan Avenue and Wyoming in Dearborn, said EMS workers took the truck driver to a hospital.

“He was coherent but dazed,” Cargill said. “I don’t know what he was doing.”

Cargill said the truck partially flipped over and part of its cab hung over onto the other side of the median.

According to an MSP press release, the Detroit Fire Department extinguished the fire.

“Concrete went flying.” Gillies said, “He was driving east and as soon as he hit the wall we saw fire. There were people screaming around here who thought he was dead.”

Gillies, who stood in an alley on Michigan Avenue and Lawndale Street above the incident, said she saw the truck driver get out of the truck and he looked fine.

“His hands were black,” Gillies said. “He came up the interstate embankment and talked to a bunch of people nearby.”