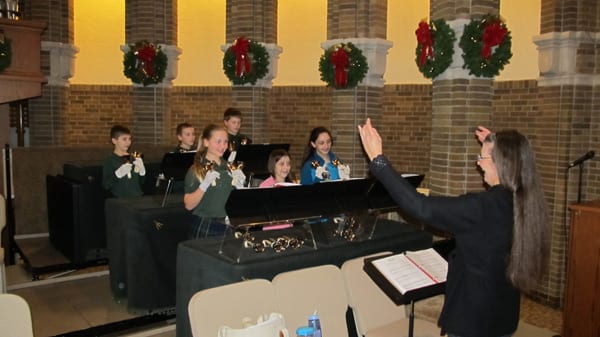 By SUE SUCHYTA
Sunday Times Newspapers
DEARBORN – Even though each Heavenly Ringer creates a distinct musical note when they ring a handbell, Sacred Heart parish’s youth handbell choir act as one instrument when they make music.

“You can consider each bell as a single key on a piano,” Youth Handbell Coordinator Linda Einpaulsaid. “And if one or two of those keys are missing, that is, one or two of the players are not ringing at the proper time, you can hear it in the music. It’s like trying to play a melody on the piano and having some of the notes gone.”

With handbells, which range from 7 oz. to 15 lbs. and come in a tuned set, each musician is responsible for particular notes that appear in a musical score. Conversely, each musician in a choir or orchestra sings or plays on their instrument all the notes on one musical line out of many in a score.

Einpaul has directed the Heavenly Ringers for 14 years, and played with the parish’s adult handbell choir for 15 years. She said the parish bought a three-octave set of Malmark handbells, made in Pennsylvania, in the mid-nineties when Brian Foos became music director under the late The Rev. James Kenneally, with a fourth octave set donated to the parish later.

When Kenneally died in March 1999, the parish received a memorial donation of two octaves of hand-made English Whitechapel bells.

The parish also has a set of hand chimes, small metal hand-held bars, which when squeezed depress a mallet, which sounds the chime’s pitch.

“It is very gratifying… my time spent with the children and getting to watch the children grow in skill is just such a joy,” Einpaul said.

Handbell ringer Anne Holmes, 13, an eighth grader at Dearborn Christian School, said people who have not heard a handbell choir often have the misperception that they play distinct separate notes, and have no idea of the music they can create together.

She said she remembers watching the youth handbell choir perform at Sacred Heart masses from an early age, and always wanted to be in it. She joined the Heavenly Ringers in fourth grade.

A love of music also attracted Holly Conklin, 11, a fifth grader at Summit Academy North in Romulus to the Heavenly Ringers, which she joined as a fourth grader.

“I really like the music, and I sometimes get bored with other music,” Conklin said. “It’s really fun.”

She said she was initially surprised at how loud handbells can be, and added that teamwork is necessary for them to sound good.

Michael Grasinski, 13, an eighth grader at Sacred Heart School, agreed that teamwork is important to the Heavenly Ringers and that the members have become friends.

“You all have to play at a certain level and can’t drown each other out,” Grasinski said. “You have to go together to make the piece sound good.”

A five-year member of the group, he said he also liked watching the Heavenly Ringers play when he was younger, and joined because he wanted to do something musical.”

He now plays clarinet in his school band as well, but feels that handbells are still a unique experience.

“You don’t have to blow into it or hit it or anything,” Grasinski said. “I don’t know any other instrument like it.”

Robert Grasinski, 11, a Sacred Heart School sixth grader, agrees with the coolness factor of handbells, adding that he followed his older brother’s lead. Although he also plays piano and saxophone, he said the uniqueness of handbell music brings him back week after week.

“Ringing the bells and playing the different pieces that are really cool to me (makes a difference),” Grasinski said.”You sort of enjoy the music… the music that we play is really nice.”

He also said he is glad the students in the Heavenly Ringers learn to work together as musicians.

“The church’s greatest art is music,” Spence said, “Even above sculpture and painting… the message of the faith is capsulized in this music, so they’re getting many benefits. And the Catholic Church having such a huge history – many denominations do – but we’ve really got something to be exposed to so many wonderful things – and they get an idea what it means to be Catholic and what the universal nature of the faith is.”