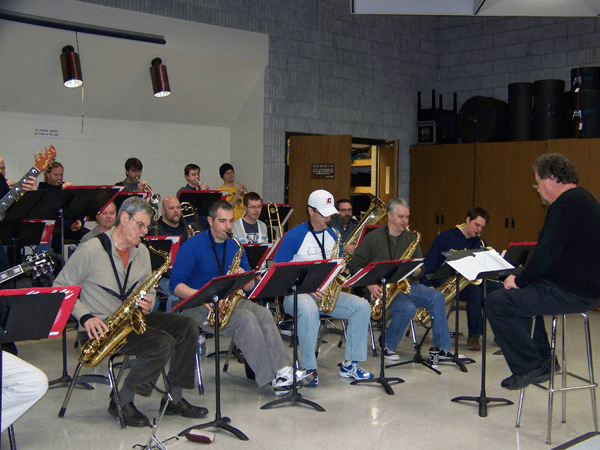 By SHERRI KOLADE
Times-Herald Newspapers
DEARBORN – Rick Goward peered over his eyeglasses in concentration as upbeat, jazzy music flitted around him.

He looked down at a few white pages on a music stand nearby that contained songs his band was scheduled to perform at President Barack Obama’s second Inauguration Day on Jan. 21.

Goward, who directs the Henry Ford Community College Big Band, then directed his attention to the band members – scheduled to perform at an inaugural event at the Smithsonian Institute in Washington, D.C. – and reminded them of the importance of enunciating each syllable during a Jan. 13 rehearsal at HFCC’s Mackenzie Fine Arts Center.

But HFCC’s award-winning Big Band members are used to pulling it together. They have played at the last three inaugurations.

Big Band and Midnight Blue Band, a 20-member band and an eight-member choir, respectively, are two of the college’s nine performance ensembles, which include 140 musicians and singers.

The band members chosen to play at Inauguration Day are from different walks of life, Goward said.

“We are music for the community and this is the fourth time and I think that is a record,” Goward said. “People who are going are school teachers, retirees. We’re just trying to do the best we can.”

The band’s “best” includes playing last summer in Europe at “Jazz a Juan,” the continent’s oldest jazz festival on the French Riviera. They shared the stage with musical artists such as Norah Jones, Bobby McFerrin and Tom Jones, according to a band press release.

The band was scheduled to play big band swing tunes, danceable ballads and a Motown medley with more than 30 Motown tunes, Goward said.

“It won’t be any different from playing at other places,” the 26-year-old said. “The venue will be cool but the feeling will be the same. That is a good thing. I get a bit nervous at first, but as you start playing it is all right.”

Kushnir, who started playing the drums in fourth grade, said he continued on a musical path through a division of HFCC’s Center for Lifelong Learning.

HFCC Big Band drummer Eric Shea, who has played in the band for 25 years, said each time he attends an inauguration it is a special experience.

“The first time was very special because I had never been personally to Washington, D.C., before,” Shea, also a Dearborn Public Schools music instructor, said. “An event like that is very exciting.”

Shea has played at both inaugural events for President George W. Bush, and played at Obama’s first inauguration and was scheduled to play at his second, he said.

“Every time you go there is really something special about it,” Shea said, “the whole atmosphere of being right there in the heart of our country’s democracy and leadership and everything else. Planning something prestigious like this is really special.”