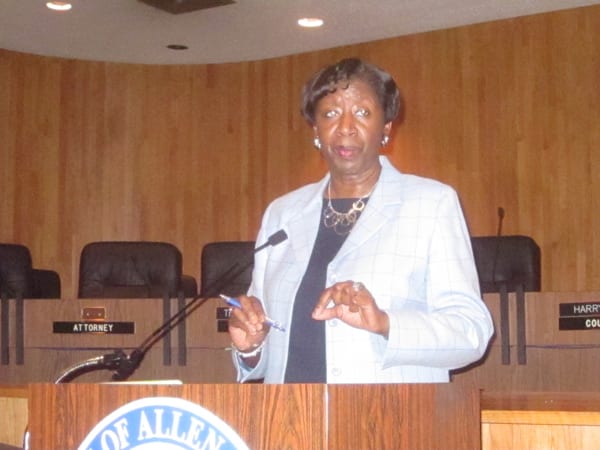 Allen Park Emergency Financial Manager Joyce Parker addresses residents during a town hall meeting Tuesday at which she unveiled her financial plan for the city.

“The city should be back in the black by 2014,” she said during a town hall meeting that night to formally discuss the financial plan for the city she finished Jan. 31 and placed on the city’s website in early February.

The plan calls for eliminating nine vacant police and fire positions and putting on the August ballot a 3.5 mill levy for the Police and Fire departments. If not approved, the plan stipulates that deeper cuts to police and fire, including the potential to outsource the departments or cut EMS services, will be necessary to meet the estimated $2 million the millage will bring in. Cutting the vacant positions would save $722,000.

Parker said the millage is slated for August to allow time to negotiate savings when the departments’ union contracts open in June.

“A number of times I’ve heard from residents who say there’s a need for reform or how we operate as a unit of government,” Parker said. “Part of what I’d like to do is make the changes, make the reform and ask the public to support police and fire with the amendment related to the millage.”

Though a similar 3.5 mill levy for police and fire was passed in November, Parker said she is confident the second millage will pass, as many residents have expressed in conversations with Parker and in a survey completed at a recent Town Hall meeting, a desire to keep their current level of public safety.

“Part of what came out of the survey is an interest in perhaps seeing some kind of increase in a millage for police and fire as opposed to making radical changes in the two departments,” she said.

Also included in the plan is refinancing the former studio property, estimated to net $1.7 million, cutting all employee salaries by 10 percent, estimated to save $381,000 annually beginning in June, and selling underused parks and vacant city-owned lots.

Parker gave a “very conservative estimate” of about $25,000 in revenue from the sale of those yet-to-be determined parks, saying an assessment was pending to determine whether the city could legally sell park land.

The requirement for employees to pay 80 percent of their health insurance is estimated to save $440,000 a year, the reduction of the mayor and council pay by 50 percent, which was instituted last year as one of Parker’s first orders, will save $52,000, and outsourcing the city assessor position and adding a deputy after the former assessor’s retirement in January will save $35,000, Parker said.

Parker also plans to cut sick days down to 12 from the existing 90, a figure that surprised many residents who learned of it during the meeting.

Parker explained that the sick days were instituted for non-union employees who did not receive short-term disability benefits.

Parker said she had questioned the sixfold increase but assumed based on conversations with former retirement board members that the figure was “pretty close.”

City Councilman Robert Keenan said at the meeting that the figure was not correct and was a result of the review team adding in the $3 million pension obligation with the $3 million retiree healthcare obligation but not doing the same to the 1991 figures.

Proposed changes not included in the current plan include reviewing district court revenue, general fund support to the downtown development authority and brownfield redevelopment authority, reviewing the pension plan, consolidating fire services with a nearby community, subcontract for dispatch and jail services and evaluating volunteer programs for police and fire.

Possible revenue streams not included in the plan are a tax anticipation note, an emergency loan, and the sale of the movie studio property, which has been listed for sale with CBRE since last year.

“We might not sell it for the amount the city actually paid for the property,” Parker said. “But the key is to get it sold and reduce the liability related to the city.”