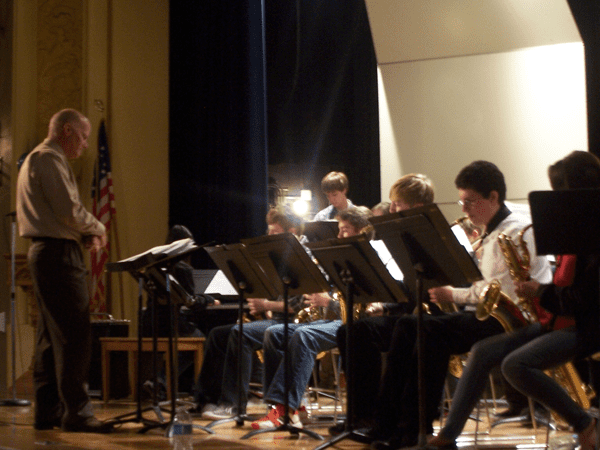 By SHERRI KOLADE
Times-Herald Newspapers
DEARBORN — Dearborn Public Schools students listened to a free jazz concert March 5, and got a few tips along the way.

Collins also gave students a different perspective about how to play.

The event was the brainchild of 2011 Fordson graduate Hassan Saleh, a 19-year-old WSU sophomore, who said he thought of the idea earlier this year.

“My friend and I were watching a band play in downtown Detroit one day and we thought it would be so amazing to get all the (DPS band) kids rounded up for this kind of thing,” said Hassan, who has played bass for the past 10 years. “So we went home that night and said, ‘Let’s do a workshop.’”

Hassan said he thought the music department could get a boost.

The event was funded by $1,000 in donations from the FHS Music Department, FHS Alumni Association, Dearborn Community Fund, Friends of the Dearborn Symphony and other community members.

FHS senior Mahmoud Asaid, who plays the guitar in the Fordson Band, said he learned a lot about different music techniques during the jazz clinic.

“I learned how everything requires dynamics for it to be very interesting,” he said.

Collins, who stood on stage in the auditorium, directed the WSU Big Band, while they peformed a few arrangements. Jazzy numbers filled the auditorium as Collins described the arrangement to the audience.

Collins said learning how to solely play music is not enough.

“It helps to understand the history of not only a composition itself, but how the piece flows together,” he said. “You, as players, need to really invest yourself in the historical pieces.”

After the WSU band performed, DPS students performed and Collins gave them musical direction and tips.

Oshnock said the experience was transformative.

“In just a short period of time a new sound was coming from the group,” he said. “The students were taught how to put emotion into their playing. “

Annapolis High School senior Tim Eversole, who plans to play the guitar more, said after the jazz clinic he learned a lot of new techniques.

“I want to learn how to play better,” said Eversole, who attended with a friend.

Eversole said one of his favorite parts of the event was hearing how WSU students played.

Saleh, who performs under the direction of Collins, said he is majoring in music technology and orchestral studies.

“Obviously everybody likes music,” he said during the clinic. “As far as playing it, I don’t think there are very many willing or motivated (people) to play. It is a problem. I think we should change that and get everybody to being able to play.”