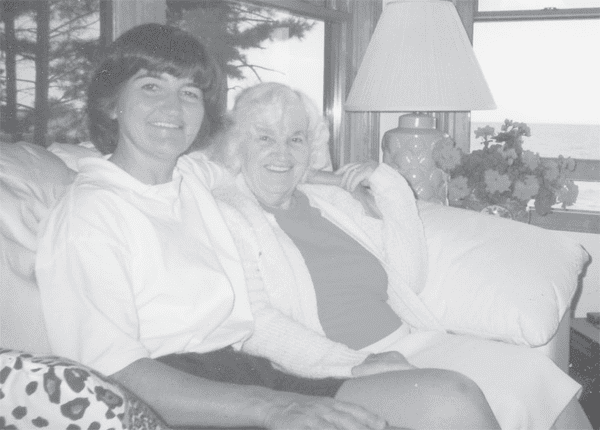 Photo courtesy of Barbara Ruth
Barbara Ruth (left) and her mother, Ann Lukiewski, sit in their East Tawas cottage in 1998.

But lifelong Dearborn resident Barbara Ruth decided to use laughter as her choice of medicine after area hospice employees helped her through a period of grief in her life.

Ruth, 66, who lost her aunt and mother in 2007 and 2009, used Livonia-based Angela’s Hospice services when her aunt died of cancer and her mother died of natural causes.

“The nurses were wonderful,” Ruth said. “They help a lot and they are very good for the patients. But being the caregiver for my mom and aunt, the social workers and care aides help the family and I think what people don’t realize is when you are giving support to the caregiver, you are helping the patients.”

Because of that support, Ruth wanted to pay it forward, especially after attending Angela Hospice’s annual Laughter Lifts You Up event, which features a comedian, dinner and a raffle.

Ruth decided to recruit as many people as she could to attend the events. But it was not only for the guffaws — ticket proceeds go toward Angela Hospice’s free bereavement programs, which Ruth often used.

“I started coming and took friends with me and now a group of 13 of us go,” Ruth said, “And they had positive experiences too. Some heard about (the hospice center) and go.”

Ruth, who has attended the events since 2008, said laughing really is the best medicine in overcoming grief.

“The fact that they focus this event on laughter, it is significant,” Ruth said. “It tells people it is OK to laugh.”

Ruth said many of the other the event’s attendees “are bonded by grief, sorrow and loss” and laughing is a positive reinforcement that means it is okay to live without sadness.

Ruth said she and her friends get together every year and when it was her turn to host an event, she thought the comedy event would be right up everyone’s alley.

“When I say, ‘OK, it is time for the (Laughter Lifts You Up) event,’ my friends are always giving me their checks right away. And we want to go get in there fast because it always fills up.”

Ruth remembers a moment last year before the event began when her heart filled up.

“Last year when I was walking into the event I saw (my aunt and mother’s former hospice aide Angela Williams) and I called her name and she turned around… and we hugged for a long time,” Ruth said while tearing up. “It was so wonderful to see her because it brought back all the memories of how she helped my aunt and mother.

“You make bonds with these people that help you when you are at your lowest point and you never forget that when I saw her. I’ll never forget those people.”

Williams, who has worked with Angela’s Hospice for six years, said she formed an immediate bond with Ruth.

“It was kind of inspiring because (her mother and two aunts) were sisters and they had the silver hair and it reminded me of the (television show) ‘The Golden Girls,’” Williams said. “When I got there they were very loving. We just hit it off and had a great relationship.”

Williams said an employee policy encourages her and her employees not to bond with patients and their family members because of conflicts of interest, but she said “it is hard not to.”

“Some people you immediately bond with and some you don’t,” she said. “For the family it is good for them because they know we are taking care of their loved ones and they feel we are special to them.”

Ruth said she knew when she first attended the Laughter Lifts You Up event it was something extraordinary.

“Right away as soon as I walked in I thought, ‘This is great,’ she said. “These are people that are all looking forward to the future and lifting each other up.”

The Angela Hospice Heals with Laugher event will take place from 6 to 9 p.m. March 21 at Laurel Manor in Livonia. For more information on ticket pricing go to www.angelahospice.org/events/index.php#events or call 734-953-6045.