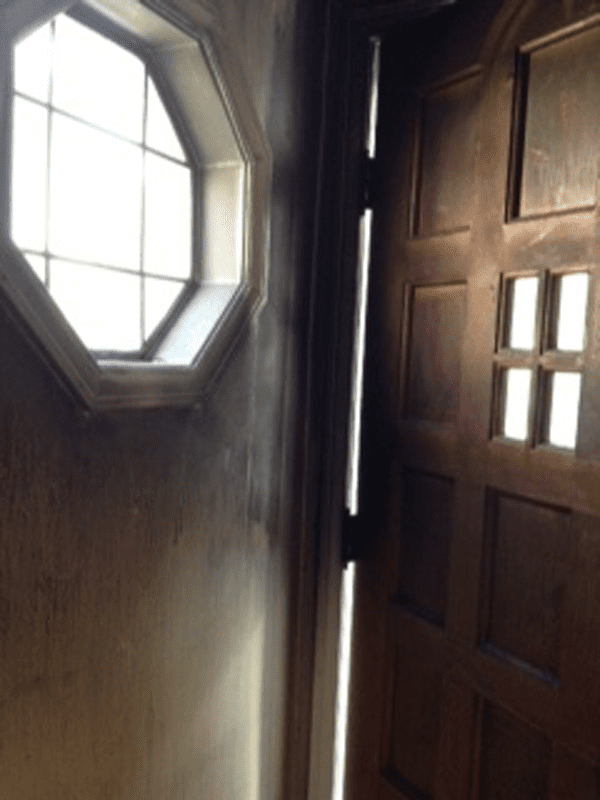 Sara Ciampa’s soot-covered vestibule (above) sustained water and heat damage when a fire damaged her house Feb. 18. Below, Sara Ciampa (left) and a construction worker stand in her soot-covered living room, facing her daughter’s bedroom. 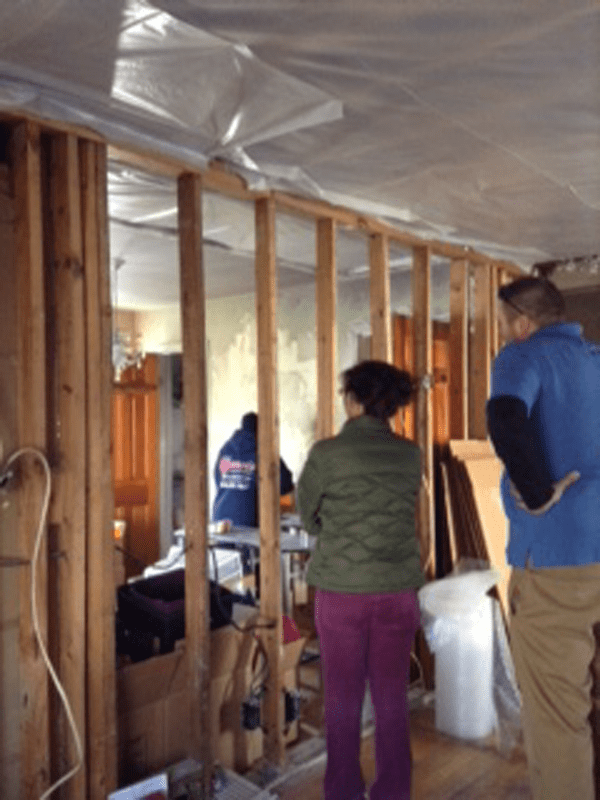 By SHERRI KOLADE
Times-Herald Newspapers
DEARBORN — Sara Ciampa hugs her daughter and two cats a little tighter each day — especially after a Feb. 18 fire ravaged her house and changed her life.

“It makes you appreciative of people,” Ciampa said recently. “You just really learn what is important and what is not. Like, I can live without this stuff.”

Lately, Ciampa, a 42-year-old lifelong Dearborn resident, has learned to live without a lot of things, including her house. She and her 15-year-old daughter, Alexis Rankin, who was not at home during the fire, are living in temporary housing until July.

Ciampa said even though staying in a pseudo house, about 10 blocks from her own, is not easy, she is grateful. Especially, thankful for two individuals she considers to be heroic.

About 10 p.m. that evening, Ciampa, who hours before purchased and lit taper candles above her fireplace, was in the basement of her 800 square-foot house on Grindley Park when she heard a crash and thought someone broke in.

She moved throughout the house when she heard another “indescribable” sound of fire burning.

“I came up the stairs and when I went through the kitchen, the whole wall above my fireplace was just on fire,” she said.

Ciampa said she figured out later that a mirror above her antique fireplace crashed and tipped the candle.

The fireplace, like many other items in her living room, could not be salvaged. She said luckily, the house’s exterior
was untouched by the fire.

She said black smoke billowed throughout her house and her phone was not working so she “just ran out into the street.”

Ciampa, barefoot and in her pajamas in 19-degree weather, ran to the nearest person she could find. In the process a car nearly hit her.

“A lot of (the) houses around are for rent and there was no place to get help so I ran into the street and stopped this couple,” she said. “And (the driver) got out and I was like, ‘My house is on fire, call 911.’”

“I think I was in shock and they stopped immediately at that point,” she said. “They could see the flames but they didn’t hesitate at all.”

She said other people may have continued to drive.

“There are so many people who would have driven around,” she said. “They were there and selfless. I don’t know what I would have done without them.”

Kantz said Ciampa was hysterical when she approached him and Stone.

“She shook me up a little bit,” Kantz said. “I thought she was being chased, and me and my girlfriend thought she was saying something about her husband. After a third time she spit it out where I could understand it.”

Kantz doesn’t consider his or his girlfriend’s actions heroic.

“I tried to do for others what I would want done for me,” he said. “It’s a karma thing.”

After Stone called 911, Ciampa and Kantz walked toward the house and tried to save her cats while the flames roared. But the fire was too much, she said.

Kantz said he took a few steps toward the basement, but the smoke was overpowering.

“I think twice about things because of my 5-month-old daughter (who was in his car during the fire),” he said, “but I wanted to help (Ciampa) as much as possible. She was grateful for that.”

When the firefighters arrived, Ciampa’s daughter called her in a panic.

It took a second before Ciampa realized that her daughter, who was visiting her grandmother in Mount Pleasant during winter break, already knew about the fire.

Rankin found out about the fire when one of her friends, who walked by her house, saw fire trucks at the scene, posted a message on Twitter and another friend called her.

Rankin said she was watching television when she saw on Twitter in capital letters “What is going on in your house?”

Rankin said she was nervous and called her mother.

“It was really stressful at first,” Rankin said. “When I first got the message I was shaky and nervous. Then right after I talked to her I started sobbing. It was really confusing.”

In all the mêlée, Ciampa said her rescuers disappeared into the night once the fire was out and she was safe.

“It was like Batman or something,” she said. “They were there and everything was OK and then they were gone.”

One cat was rescued by a firefighter and a few days later Ciampa found the second cat, safe but frazzled and covered in soot, in her house.

When the flames were washed away by jets of water from fire hoses, Ciampa did the next best thing she could a week after the fire – she sent a card to the couple and baked a cake for Dearborn firefighters.

“My first thing was to get them a card,” she said. “It was one of the things I did that week that was good. The rest was just insurance companies, reconstruction companies, one of those ‘What am I going to do?’ things.”

Ciampa dropped the thank-you card off with police officers, who mailed it to the couple.

Kantz said the card “meant a lot” to him and his girlfriend. They plan to pay it forward.

“I would like to send a card back,” he said. “I didn’t expect her to send a card, especially with what she was dealing with. We were surpised.”

Currently, a restoration company is reviewing the salvageable and non-salvageable items in Ciampa’s house. She and her daughter are picking out new color schemes and potentially remodeling plans for parts of the house damaged by the fire.

The house’s entire first floor must be redone and the attic and basement fixed up because of damage, she said. Luckily, Ciampa said, all damage is covered by her homeowner’s insurance.

“You don’t realize the damage that can be done in such a quick (amount of time),” Ciampa said. “It is incredible.”

More than a month after the fire, Ciampa can finally tell her story without crying. She and her daughter said they see the light at the end of the tunnel, she said.

“Just that week I wanted to redo my room,” Rankin said with a smile.

Ciampa said she and her daughter “kind of find bright sides” to an otherwise bleak situation.

“She was safe and I was safe,” she said. “We’re very grateful. It could have been much worse and it gets better every day.”

Fire Station No. 2 firefighters did not return calls by press time.