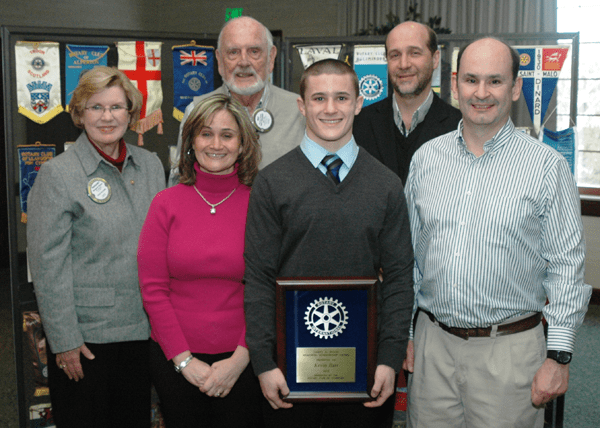 Photo courtesy of Margaret Blohm
Kevin Hart (fourth from left), Divine Child High School senior and 2013 recipient of the Harry A. Sisson Memorial Scholarship, displays the award with his parents Robert and Jennifer Hart (right and second from left, respectively) who attended the presentation. Presenting the award are Rotarians Margaret Blohm (left), chairwoman of the Selection Committee, Rotarian of the Year Ray Trudeau and club President Hassen Hammoud.

Criteria for winning the Sisson Scholarship include exemplifying the Rotary service ideals, along with high academic achievement, leadership among peers, and demonstration of the highest ethical standards. The award was presented to Hart by Ray Trudeau, the club’s Rotarian of the Year.

The club, through the Dearborn Rotary Foundation, awards the annual $5,000 college scholarship, which is made possible through an endowment provided by the Harry A. Sisson Foundation. The Harry A. Sisson Memorial College Scholarship Award is presented in recognition of an Outstanding Senior attending a public or private high school in Dearborn.

Scholarship candidates are nominated and endorsed by the student’s high school principal and academic advisor for specific community service and leadership accomplishments.

In addition to maintaining high academic standards, Hart is president of Divine Child’s Student Council Executive Board and captain of the wrestling team.

He also helped to organize a fundraiser that collected more than $3,000 for the Wounded Warrior project. A Dearborn Animal Shelter volunteer, Hart is a member of the “Pit Crew” teaching shelter dogs, especially pit bulls — proper cage behavior to help them receive a loving home.

Hart said his career goal is to become an electrical engineer and has already been accepted to attend Notre Dame and is awaiting response from MIT and Harvard.