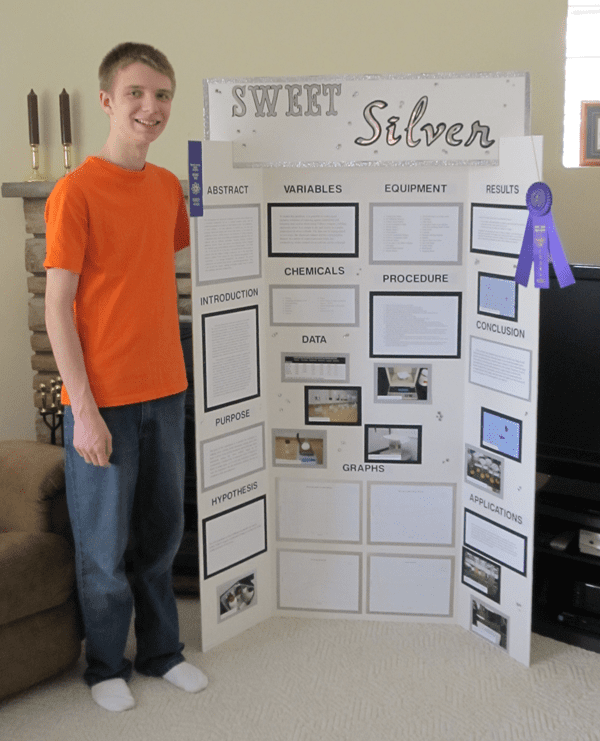 Photos by Sue Suchyta
Dearborn Heights resident and Divine Child High School sophomore Dean Jarois (above), 16, and Robert Pakko (below), a sophomore at Dearborn High School and the Dearborn Center for Math, Science and Technology, display their winning science projects which will compete at an international competition May 12 to 17 in Phoenix. Ariz. 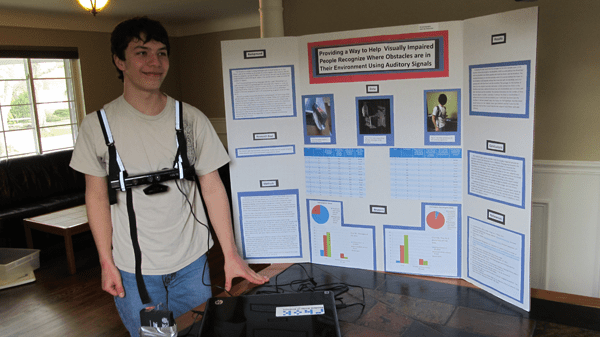 Sophomores Dean Jarois, 16, of Divine Child High School and a Dearborn Heights resident, and Robert Pakko, 16, who attends both Dearborn High School and the Dearborn Center for Math, Science and Technology, are among seven senior division finalists headed for the international science fair competition in Phoenix. They were among over 1,500 entries from schools in Wayne, Oakland and Macomb counties March 13 at SEFME at Cobo Center.

For his project, Pakko created a system that, when worn, used audible signals to help visually impaired people detect objects in their environments.

Jarois found which sugars produced silver colloids (small, suspended particles) of a desired conductivity when reduced from a silver nitrate and ammonium hydroxide solution. He said the product has practical applications in medical and industrial use.

The SEFMED winners will compete for scholarships and other honors at the Michigan Science Fair April 13 at Kettering University in Flint in addition to the international competition in Phoenix in mid-May.

PAKKO: HELPING THE BLIND TO SEE
Pakko used a Kinect, a motion-sensing device for Xbox 360 video game consoles and Windows personal computers, to project a grid of infrared lights in front of it, and the device measured how far away each infrared light was from the
Kinect.

Sixteen blindfolded test subjects, Pakko’s classmates, wore the Kinect on their chests with a belt-like suspender harness, a battery pack and laptop computer worn in a backpack.

He said the computer programming was the most difficult part of the project, since he had to learn the programming language. He estimates that he spent about 100 hours on his project.

He said that his love of video games gave him the idea.

“I was on a gaming news website, and I was reading about all the cool things that people were doing with the Kinect and how it was the fastest-selling consumer electronic device of all time,” Pakko said. “I looked at all the things people were doing with it and I thought, ‘I already own a Kinect, maybe I could do something really cool with it.’”

He saw how people used Kinect to make machines “see,” so he decided to see if he could use it to help people see. When he ran trials with 16 blindfolded friends as test subjects, he found that most of the time they were able to avoid hitting walls when using the device.

He said his teachers, especially his research class teacher Jeff Whittaker, are all excited by his win, and said he was the youngest person in the history of the DCMST to go to the International Science Fair.

Pakko said he is excited about the International Science Fair, which will host students from 50 countries.

His parents, Erin Clausing and Jim Pakko, both mechanical engineers at Ford Motor Company, are proud of their son’s achievement.

“I’m really excited,” said Clausing, who will accompany him, “especially because the International Science Fair will have people from 50 different countries, and it will be really exciting. It will be like staying at the Olympic Village. It’s an incredible opportunity.”

JAROIS: SWEET SILVER
Jarois freed silver trapped in the center of the molecules of diammine silver or Tollen’s Reagent, a clear liquid, when he added different sugars/ The sugar donated electrons to the molecules that trapped the silver. He then tested the conductivity of the resulting colloidal solution, a liquid with tiny silver particles floating
in it.

He found which sugars created colloid solutions with the best conductivity, which has value in the electronics industry when used to make conductive inks and adhesives.

Jarois said he got his project idea from a paper about silver colloid nano-particles synthesis characterization and their anti-bacterial activity published in an online chemical journal by researchers from the Czech Republic. He said he thought they made some good points with an interesting experiment, but he thought that there were parts of the study where they could have done better, and he wanted to do the research that they left out.

In addition to being conductive, colloid solutions are also anti-bacterial, which Jarois said would make them a beneficial paint additive in medical facilities.

His mother, Tara Jarois, who asked Pashishnyk to advise her son, works at HFCC in the health careers department. She said she was excited when he won, and glad that his academic achievements are gaining him recognition.

“I am so proud that finally he is getting recognized for how smart he is,” she said. “I think with playing sports kids are so recognized, and kids that… do well in academics don’t get noticed as often.”

His father, Keith Jarois, said his son’s early science experiments consisted of mixing chemicals to create explosions, like sodium and water, which set his grandmother’s card table on fire one Thanksgiving when he was still in grade school, an event about which they still tease him.

Dean Jarois said he was turned on to science by his seventh grade science teacher, Amy Castelli, at St. Sebastian Catholic grade school in Dearborn Heights.

His current high school science teacher at Divine Child High School in Dearborn, Kathy Higgins-Luthman, said he is an outstanding student driven to understand and experiment in chemistry.

“He has great potential and dedication to achieve his goals in the field of chemistry,” Higgins-Luthman said. “It is rare for a student at his level to demonstrate such a love and enthusiasm for chemistry.”