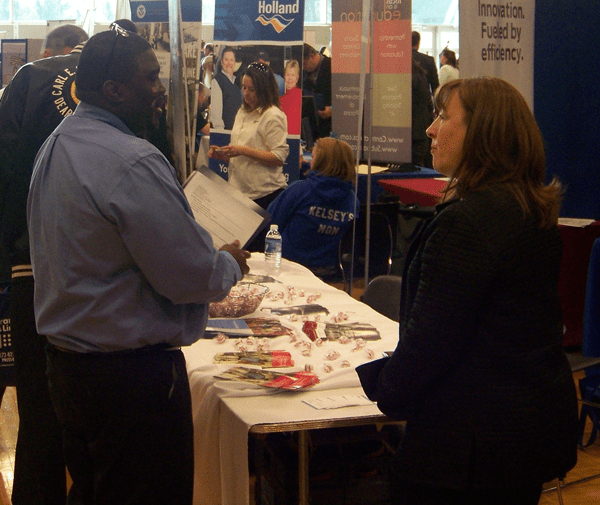 By Bob Oliver
Times-Herald Newspapers
DEARBORN — The last time that the U.S. Chamber of Commerce’s Hiring Our Heroes set up a job fair in Dearborn 73 veterans and military spouses found jobs.

After the successful outing last April, organizers hoped for even better results this year as they set up at the Ford Community and Performing Arts Center on April 4.

Pre-event registration numbers included over 100 companies and over 350 attendees, with the number of attendees likely higher because walk-ins with proof of service were welcome.

Army and National Guard veteran Adrian Revel was pre-registered for the event and was hoping to find a more secure future for himself.

“I work two jobs and it’s very hard,” Revel said. “I’d like to find a job that offers more opportunities for me.”

Another jobseeker was Alfred Johnson. Johnson lives in Detroit and is a veteran of the U.S. Navy. It was not his first Hiring Our Heroes event, but he felt he should attend to see the growing number of hiring companies. He also believed that his past events helped prepare him for the fair.

“I have learned by attending these what traits the employers are looking for,” Johnson said. “There are little things I can do to help make the right impression and let them know that I’m the guy they’re looking for.”

Of the over 100 companies with booths set up, many had attended last year’s event.

Vincent Topps, an agency recruiter with State Farm, worked the booth last year and be lieved that the steady flow of veterans that he talked to and saw walking around the room was a great sign.

“These events are needed,” Topps said. “They provide hope and inspiration to jobseekers because it is proof that there are jobs out there for talented people and that companies are hiring.”

Kristen Dunn of Promedica also felt that the event was good for the community.

“This is an awesome event and the veterans definitely deserve this,” Dunn said.

She also knows firsthand how such events can work, as another recruiter from her company, Alan Provins, got his job after attending last year’s Hiring Our Heroes job fair. He spent his time at this event interviewing fellow veterans for positions.

One reason that the event is able to attract so many hiring businesses is because the organizers are able to offer free booth space, U.S. Chamber of Commerce spokesperson Kim Morton said.

“The grants from the companies that sit on our advisory council allow us to make the fairs free for jobseekers and employers, so small businesses that want to hire veterans, but can’t afford hiring fair table fees can come out and recruit,” Morton said.

The next Hiring Our Heroes event will be in Detroit on July 16.