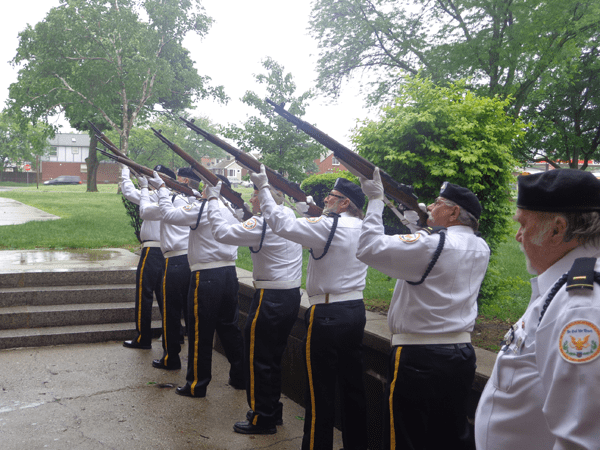 Schools honor the ultimate sacrifice
Photo by Bob Oliver
Members of the Dearborn Allied War Veterans Ritual Team fire a salute in tribute to fellow veterans who have lost their lives in the U.S. military. They participated in the Fordson High School War Veterans Memorial Thursday. The team is made up of Bob Dixon (left), Craig Tillman, John Young, Al Tortonesi, Pete Borella, Frank Pelaccio and Lenny Pitek.

By BOB OLIVER
Times-Herald Newspapers
DEARBORN — In a crowded auditorium and beside a high school track Thursday, Dearborn Public Schools observed Memorial Day by paying tribute to former students at Edsel Ford and Fordson High Schools who went on to serve in the country’s military after attending their schools.

In the first event at EFHS students, staff and community members gathered to take part in an annual ceremony honoring the 23 Edsel Ford students who were killed during the Vietnam War.

“Memorial Day is the day to acknowledge the sacrifices of those men and women who have given their lives for the service of their country,” Principal Scott Casebolt said. “We are here today to honor our heroes and to remember their achievements, their courage and their dedication and to say ‘thank you’ for their sacrifice.”

“Let it be known that Edsel Ford High School will never forget its heroes,” Jaafar said.

Jaafar presented Casebolt and the school with an American flag that was flown on Capital Hill in Washington, D.C., in honor of the fallen Edsel Ford students. He asked that EFHS start a new tradition by flying the flag on campus on Memorial Day weekend.

Whiston spoke of the importance of holding the ceremony annually.

“In remembering we celebrate, and in celebrating we honor those who lost their lives for us.” he said.

O’Reilly said the city of Dearborn makes it a special point to honor veteran holidays.

“We never miss a significant remembrance, whether it’s Flag Day, Veterans Day and even the ending of the Korean War,” O’Reilly said. “Dearborn has been conscience of making sure that we don’t forget our heroes.”

The EFHS combined choir sang musical selections for the crowd throughout the ceremony.

After the speeches the names of the former students killed were read aloud from the stage by current EFHS students. As each was read, another student walked out of the room to carry a rose to the memorial plaque outside the auditorium.

The playing of “Taps” concluded the event.

The second event was held at Fordson High School and was re-located into the auditorium because of rainy weather. The school originally planned to host the event on the outdoor track. It also honored former students who have died while serving the country in the military.

Murray spoke to the students about how important the Memorial Day holiday is to himself and the community.

“By holding this ceremony we are letting those who are in the military today know that Fordson High School and the city of Dearborn do not for forget their service,” Murray said. “

Smith discussed the 118 former FHS students who have been killed in World War II, the Korean War and the Vietnam War.

“Veterans sacrifice by not only going to war but by serving in peace time as well,” Smith said. “It is important to recognize those who have served our country.”

After the speeches were completed the Dearborn Allied War Veterans Ritual Team fired a six-gun salute to the fallen soldiers outside of the school. After the group discharged three rounds, “Taps” was played for the audience.

FHS Principal Youssef Mosallam pledged that the school was going to keep working to grow the ceremony every year and reminded students in attendance of the meaning of the holiday.

“Memorial Day is not just a time to celebrate with your family and enjoy a barbecue.” Mosallam said. “It is a time for you to reflect upon the freedoms that you have, why you have them and all those that have given the ultimate sacrifice so that you can have them.”