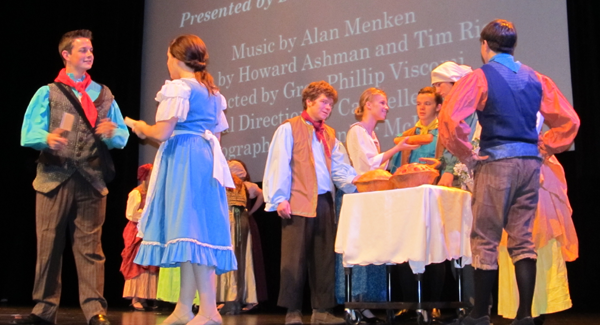 Photo by Sue Suchyta
Dearborn High School thespians perform a medley from the musical “Beauty and the Beast” at the annual Dearborn Area Theater Association awards ceremony held at the Ford Community & Performing Arts Center. The show received eight awards, including outstanding achievement in a musical at the scholastic level.

The Players Guild of Dearborn’s production of Sondheim’s “A Little Night Music,” directed by Harold Jurkiewicz, won seven awards, including outstanding achievement in a musical, as well as a sweep in the best lead and supporting actor and actress categories, best scenic design and best costume design.

Mike Moseley delivered a glowing tribute to the humbleness and hard work of Brian Townsend, the 2013 inductee to the Dearborn Theatre Hall of Fame.

Moseley urged audience members who know Townsend to think how they feel when in his presence.

“What I want everyone to do who knows Brian and loves Brian is I want you to stop right now and I want you to remember how Brian makes you feel,” Moseley said.

Moseley said that after one rehearsal with Townsend he felt like he belonged to the community theater group he had just joined.

“In community theater, in this world that we have, it’s so important to be able to do that with graciousness and a genuine sense of love that Brian Townsend has,” Moseley said.

“He is an actor that other actors want to share the stage with,” Moseley said. “His generosity and truly collaborative style make it easy for his fellow actors to find the best in their own performances.”

In addition to Townsend’s many onstage roles, Moseley mentioned his work behind the scenes.

Townsend wrote three comedies, “Therapy,” “Pass the Ducks,” and “Is This Seat Taken?” that he let local theater groups perform as fundraisers.

His home theater, though, for 23 years, has been the Players Guild of Dearborn, where he served as a governor in several capacities and used his talent as a graphic artist to enhance playbills, show posters, direct mail pieces and the group’s website.

“Brian Townsend exemplifies the very best of what community theater is about,” Moseley said. “He leads by example. By being a generous, thoughtful member of the community, he brings his remarkable talents forth to be shared in only the best ways to create noteworthy and memorable theatrical experiences for all involved.”

Townsend injected his unique blend of humble humor into his acceptance speech, and even took part in a funny, tongue-in-cheek video created prior to the DATA awards, which poked fun at the seasoned thespian.

Townsend said amidst appreciative laughter that at some point you will only know when major life events occurred by what show you were doing at the time.

He also reminded male actors to remove their makeup after a show so someone will not ask at work the next day if they are wearing mascara.

He also added that the mistakes made in rehearsals are often better than the material in the script.

The community theater honored Townsend with a standing ovation following his humorous and heartfelt acceptance speech.

For more information, go to www.dearbornareatheatre.org.

The school is at 1001 N. Silvery Lane in Dearborn.