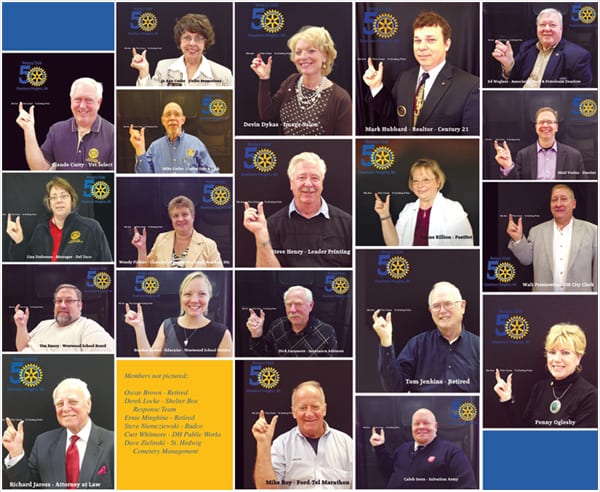 The world is on the verge of eliminating one of the most dreaded diseases of the 20th century — poliomyelitis. During the first half of the 20th century, polio crippled over a half a million people every year. Even today, children in some developing countries continue to fall victim to the disease. But thanks in large part to Rotary International and to the 1.2 million Rotary members worldwide, the disease will soon be all but a memory.

Before celebrating this public health milestone, the spread of the poliovirus must be interrupted in the poorest and most populous regions of the world, and surveillance must continue for several years to be sure the virus is completely wiped out. This is no easy task. One of the greatest challenges to the effort is a funding shortage.

In January 2012, Rotary leaders announced Rotary clubs had raised more than $200 million in response to a $355 million challenge grant from the Bill & Melinda Gates Foundation, which in turn contributed an additional $50 million in recognition of Rotary’s commitment. All of the resulting $605 million will be spent in support of immunization activities in polio-affected countries.

To date, Rotary has contributed more than $1 billion to the protection of more than 2 billion children in 122 countries. Rotary reaches out to governments worldwide to obtain vital financial and technical support. Since 1995, donor governments have contributed in excess of $6 billion to polio eradication, due in part to Rotary’s advocacy efforts. But much more is needed. More than 20 years of steady progress is at stake, and polio — now on the ropes — stands to stage a dangerous comeback unless the funding gap is bridged. Learn more ways to help at: endpolionoaw.org.

In addition to raising money for polio eradication, Rotary members offer their time and expertise in the field to fight polio by providing support at clinics, transporting vaccine, contributing medical supplies, and mobilizing their communities for immunization and other polio eradication activities. More than 1 million members of Rotary worldwide have contributed toward the success of the polio eradication effort to date, demonstrating the extraordinary impact civil society can have on a global public health initiative.

With our spearheading partners in the Global Polio Eradication Initiative — the World Health Organization, UNICEF, and the US Centers for Disease Control and Prevention — Rotary continues to make progress toward a polio-free world.

Once eradicated, polio will join smallpox as one of only two diseases ever eliminated.  And the volunteers of Rotary will continue their humanitarian work, living up to its motto, “service above self.”

To raise awareness and critically-needed funds to fight the crippling disease polio, The Rotary Club of Dearborn Heights has fundraisers such as its annual LobsterFest, raffles, community shred day and collection boxes placed at local businesses throughout the city.

The effort raises money for Rotary International, the volunteer fundraising arm of the Global Polio Eradication Initiative — a public-private partnership that also includes the World Health Organization, the U.S. Centers for Disease Control and Prevention, UNICEF, and the Bill & Melinda Gates Foundation.

These events come at an important time in the fight to eradicate polio, which would be only the second human disease to be eradicated. Case numbers of the disease have never been lower, and only three countries (Nigeria, Afghanistan and Pakistan) have never stopped transmission of the wild poliovirus.
However, a funding gap means immunization campaigns are being cut in high-risk countries, leaving children more vulnerable to polio. If polio isn’t stopped now, the disease could stage a comeback, affecting an estimated 200,000 children every year.

Rotary, a humanitarian service organization with nearly 34,000 clubs in more than 200 countries and geographical areas, made polio eradication its top priority in 1985.  Rotary has since contributed $1.2 billion, and its members have logged countless volunteer hours to help immunize more than 2 billion children in 122 countries.

Overall, remarkable progress has been achieved in the fight against polio. Since 1988, the number of polio cases has been reduced from 350,000 a year to fewer than 700 cases in 2011. The Americas were declared free from polio in 1994, the Western Pacific region in 2000, and Europe in 2002.

A highly infectious disease, polio still strikes children mainly under the age of 5 in parts of Africa and South Asia. Polio can cause paralysis and sometimes death.  There is no cure for polio, but for as little as 60 cents worth of oral vaccine, a child can be protected from the disease for life.

For further information, go to www.endpolionow.org

The Dearborn Heights Rotary club has been providing local services since 1964, the year of the club’s charter with Rotary International. Our community services projects and activities are varied and many designed to improve the quality of life in Dearborn Heights. We organize an annual program bringing books and personalized bookcases to third-grade students at Daly Elementary School, back-to-school packages distributed by the Salvation Army, partnership with Starfish Family Services in Operation Warm, Kids Against Hunger, community document shredding projects, local Thanksgiving baskets distributed by the Salvation Army, involvement with Relay for Life, sponsorship in the Dearborn Heights Spirit Festival and free bicycle helmets to kids at our annual Bicycle Safety Rodeo in the spring.

Vocational Service calls on every Rotarian to work with integrity and contribute their expertise to the problems and needs of society. The club’s vocational projects include providing college scholarships for Dearborn Heights students totaling $5,000 annually, conducting of a semi-annual job shadow program, and various other projects promoting members vocations in the community.

International Service exemplifies our global reach in promoting peace and understanding. We support this service avenue by sponsoring or volunteering on international projects in Honduras and Nicaragua, working with partners in Peru and Brasil, and more. We also have a special on-going partnership with ShelterBox, the largest disaster relief organization worldwide that provides shelter, clean water and life saving equipment following a disaster.

If we have piqued your interest in finding out more about Rotary, you have a standing invitation to visit our Club meeting at the Canfield Community Center, in Dearborn Heights. We meet every Wednesday at 12:15 p.m. Please join us, and see why Rotary is one of the finest organizations in the world. To find out more go to our website at www.dearbornheightsrotary.org.