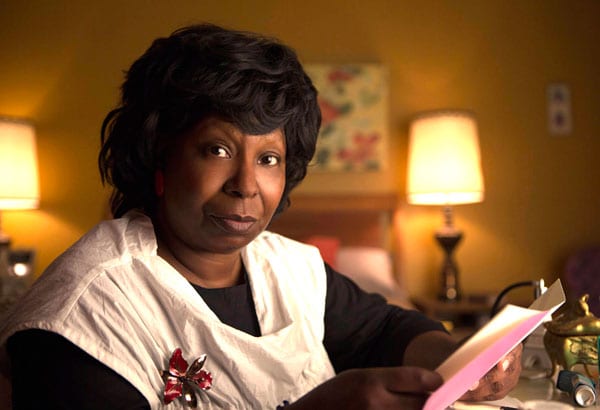 By Cindy Elavsky
Q: While I love Whoopi Goldberg on “The View,” I’d like to see her in a movie —  on the big or small screen —  again. —  Fannie D., Atlanta

A: Whoopi can be seen later this season on “Glee,” as well as on the big screen in “Teenage Mutant Ninja Turtles” and “Big Stone Gap.” But if you need your Whoopi fix now, she stars in the movie adaptation of Terry McMillan’s “A Day Late and a Dollar Short,” with Ving Rhames, Mekhi Phifer, Anika Noni Rose and many more. The movie premieres on Lifetime on Saturday, April 19, at 8/7c. Whoopi plays matriarch Viola Price, who learns that her next asthma attack will likely kill her, so she is determined to fix her fractured family before she leaves this world.

Whoopi told me they didn’t have to ask her twice to play the part of Viola, revealing: “The executive producer called me and said, ’I have this property and I would like you to do it.’ So I asked, ’What is it?’ and he said, ’It’s by Terry McMillan’ and I said, ‘I’m in.’ He didn’t even need to tell me the name of the piece. Then I read it, and I thought, ’OK, this will be fun.’ And the caution in this tale is, ’You’d better pay attention to your life because you never know when it’s going to go away from you.’”
***
Q: Can you tell me if “American Horror Story” will be back for a fourth season, and if so, do you have any spoilers for me? —  Katrina R., via email

A: Mild spoilers ahead: “AHS” creator Ryan Murphy recently announced that “Coven” will be followed by the 13-episode “American Horror Story: Freak Show,” which will take place in 1950 in Jupiter, Fla., and will feature Jessica Lange as a “German ex-pat who is managing one of the last freak shows in the U.S.” Her “freaks” will be played by returning stars Kathy Bates, Sarah Paulson, Evan Peters, Angela Bassett and Frances Conroy. “Entertainment Weekly” reported that Denis O’Hare and Emma Roberts are in talks to return to the show. A premiere date has not yet been set.
***
Q: Are the rumors I’m hearing about a sequel to “The Incredibles” true? —  Jonathan P., Erie, Pa.

A: Last month, Disney’s chairman and CEO, Robert A. Iger, announced that Pixar Animation Studios is indeed developing a big-screen sequel to Brad Bird’s 2004 superhero adventure “The Incredibles.” Brad Bird, who wrote and directed the first film, has said that he would be open to filming a sequel if it “had a truly great story” behind it.
***
Q: Is this season of “Dallas” already over? It seems like it’s only just begun! —  Lily T., via email

A: Don’t worry —  the show is merely on summer hiatus. “Dallas” returns to TNT for the second half of its third season starting Aug. 18 at 9 p.m. ET/PT.