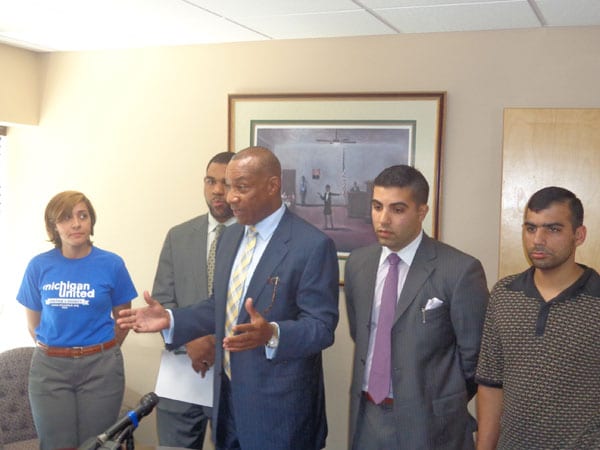 By BOB OLIVER
Times-Herald Newspapers
DEARBORN — Attorneys Cyril Hall and Amir Makled are filing a lawsuit in the U.S. District Court for the Eastern District of Michigan against the Dearborn Police Department for an alleged assault by DPD officers against a mentally impaired resident last December.

The lawsuit was announced by the attorneys at Hall’s office, 14650 W. Warren Ave., Thursday.

“We are alleging that excessive force was used, assault and battery, gross negligence on behalf of the Dearborn police officers who arrived at the scene, intentional deflection of emotional stress against Mr. (Ali) Beydoun and possible other counts,” Makled said.

He added that the attorneys and their client believe that a civil rights violation had taken place.

The Council on American-Islamic Relations Executive Director Dawud Walid said the organization filed a request with the U.S. Department of Justice’s Civil Rights Division last week to look into the incident.

“We don’t see any justification for the force that was used and we feel that this was most likely triggered by racial profiling,” Walid said.

The incident in question occurred about 4:45 a.m. Dec. 7, when Beydoun, a 28-year-old Dearborn resident, was stopped by police while riding his bicycle near Gould and Anthony.

In the police report for the incident, the responding officer said he was patrolling in the area and witnessed a male on a bicycle riding east on Gould. The officer said he became suspicious because the rider was improperly dressed for the 20 degree weather, had no lights on his bicycle and was disregarding stop signs.

According to the officer, it is common for criminals to use a bicycle when traveling to an area to steal cars and Beydoun was riding at an early morning hour in a neighborhood that has experienced several auto thefts and break-ins.

The officer stopped Beydoun and asked for identification, which Beydoun said he didn’t have and then asked why he was riding a bicycle through the neighborhood and received no answer.
The officer then informed Beydoun that he was going to search him for
weapons, but Beydoun resisted, which resulted in a scuffle between the men.

Beydoun was forced to the ground and the officer called for backup.

The officer admitted in the report to kneeing Beydoun three times to get him to stop resisting and to cooperate with the officers.

Beydoun was eventually secured in handcuffs and placed in a patrol vehicle before being transported to Oakwood Hospital though he had reported no
injuries.

Police then notified Beydoun’s sister about the incident and released him to the hospital staff.

Beydoun was not charged with any wrongdoing by police.

A police dash cam video of the incident surfaced last week on YouTube and received more than 3,800 views in the first 24 hours online.

In a release regarding the incident, the Police Department stated that after reviewing the case it was determined that the officers acted correctly during the incident.

The release added that Beydoun “resisted police officers’ lawful instructions, resulting in the necessary use of force,” and that “once the incident was under control, officers cared for the well-being of Mr. Beydoun by transporting him to Oakwood Hospital for suspected mental health issues.”

Walid disagreed and said the video of the incident “spoke for itself” and that the violence wasn’t justified.

“When I saw the video I was horrified,” Walid said. “I believe that the Police Department should strongly consider having another internal review of this incident and the track record of the officer who first manhandled Mr. Beydoun.”

Hall said Beydoun had been riding home from work at a nearby cafe when he stopped because the chain on his bicycle had become dislodged and he had stopped to fix it.

“He was on the street fixing his bicycle,” Hall said. “No criminal activity was afoot and there was no reasonable suspicion that he was engaged in criminal activity. The officer asked to search him, but in order for that to take place he would have had to have been involved in some kind of violation of criminal law.”

Beydoun appeared at the press conference and spoke briefly with Makled
acting as his interpreter because he has a limited knowledge of the English language.

Beydoun said he was “lost for words” over the incident and that it is still “very fresh in his memory.”

Hall said Beydoun has no criminal history and that he lives with his mother not far from the scene of the incident.

Hall said Beydoun sustained minor physical injuries in the altercation, mainly contusions and abrasions to his face, but that the mental impact of the event was far greater.

“He is now suffering from a great deal of mental anguish as well as humiliation and embarrassment from the incident,” Hall said.

Hall said the video clearly indicates that Beydoun was confused during the interaction with police about what was happening and can be heard calling for his mother.

“He didn’t understand what was going on or why he was being taken to the ground when he was just trying to fix the chain on his bicycle,” Hall said.

Makled said there were two police officers initially but that the number grew to eight before Beydoun was “tossed into the back of a patrol car” and transported to the hospital.

“We really feel that the facts of the case show that excessive force was used and that our client’s civil rights were violated,” Makled said.