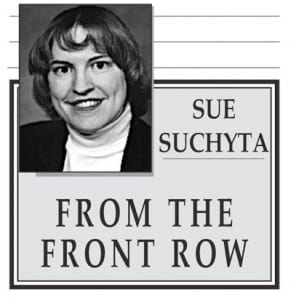 A spectacular production of Andrew Lloyd Webber’s “Phantom of the Opera” plays through Jan. 22 at the Detroit Opera House, 1526 Broadway in Detroit.

Based on the Gaston LeRoux novel, “The Phantom of the Opera” follows the reign of terror of a masked man who lurks in the catacombs below the Paris Opera House who falls in love with soprano Christine. He nurtures her talent to make her a star, but not without resorting to devious means.

Webber said he is pleased that “Phantom” continues to tour in North America while the show approaches its 30th year on Broadway.

Mackintosh said with “Phantom” as the longest-running show on Broadway, he is delighted that the new production is as well-received as the original.

“With ‘Phantom’ still the reigning champion, with no end in sight, an exciting new design and staging is thrilling audiences and critics alike all over again,” Mackintosh said.

Tickets start at $35. To order, call 800-982-2787 or go to Ticketmaster.com or BroadwayInDetroit.com. For more information about the show, go to ThePhantomOfTheOpera.com/ustour.

The Downriver Actors Guild recently announced the cast of “Lion King Jr.,” bringing warmth to Wyandotte even as the wind chill dropped temperatures to the single digits.

Vasquez said he is enjoying bringing one of his favorite childhood Disney movies to life onstage, and watching the young actors hone their craft while developing their jungle characters.

“I believe children are more willing to expand their imaginations than adults are,” he said. “If you tell a kid that they are an elephant or a giraffe, they become that animal. That is what I enjoy about working with the kids.”

In addition to the talent on stage, Vasquez said audiences will be impressed by the technical side of the show.

“The creative team have some cool things up our sleeves that should make this truly wonderful,” he said.

Vasquez said the show will help audiences forget Michigan’s chill as they are swept away to a warmer world.

“From the moment the show starts, to the very last song, audiences will be transported to Africa with a creative set, colorful costumes and lights, a powerful score, cool choreography and amazing talent,” he said. “You’ll have to remind yourself you don’t need a passport to theater.”

The cast taking audiences on the journey include Courtney Perttula, 12, of Allen Park as Nala; Madison Ganzak, 13, of Dearborn Heights as Rafiki; Connor Moran, 12, of Melvindale as Mufasa; Cassidy McFarland, 8, of Riverview as Timon; and Trenton residents Lauryn Hill, 8, as Banzai, Camdyn Konarski, 7, as Ed, and Madison Konarski, 9, as Scar.

Also in the cast are Brownstown Township residents Calleigh Butler, 8, as Young Nala, and Elaina Primeau, 11, as Zazu; Vincent Mazotta, 7, of Huron Township as Young Simba; Emma Otter, 10, of New Boston as Sarabi; Antonella Menna, 9, of Newport  as Pumba; and Emily Ascencio, 8, of Westland as Shenzi.