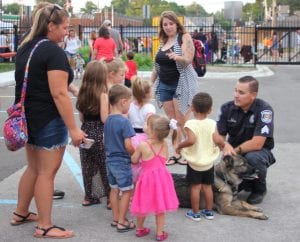 Police, fire, Community Emergency Response Team and Special Weapons and Tactics vehicles were on display, with snow cones and popcorn on the menu. A dunk tank offered a chance to send an officer into the water for a refreshing dip, and K-9 officers from nearby cities demonstrated their drug sniffing prowess to captivated crowds.

Police Chief James Wilkewitz said National Night Out is a nationwide event for law enforcement to invite the community to meet the police officers and make important community connections.

“This is our inaugural one, and it has turned out pretty well,” Wilkewitz said. “We have several hundred people here, we have done some K-9 demonstrations, and have our SWAT and CERT vehicles out here, and a dunk tank over here so you can dunk a cop, and a doughnut eating contest for the kids.”

He said there also were games and prizes for children, and a raffle featuring prizes donated by local merchants.

“This is kind of a nice way to have everyone come over and though they can’t really be in our new building, they can at least see it if they haven’t been up here yet,” Wilkewitz said.

He said one of the perks of being the chief was he would not have to take a turn in the dunk tank.

“A bunch of officers volunteered their time to come out tonight and get in the tank or help out with the games or show off equipment,” Wilkewitz said. “There are police cars for the kids to climb around in and see how the lights and sirens turn on, and see the radio equipment and in-car computers – all the stuff that little boys and girls are fascinated with.

“It’s just a way to do something for the community, have them come out and spend some time with us.”
(Sue Suchyta can be reached at [email protected])