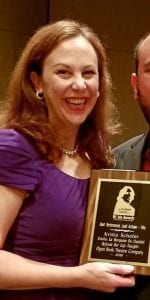 Krista Schafer Ewbank, well known as the founding artistic director of the Open Book Theatre, has been named the winner of the Wilde Award for Best Performance by a Lead Actress in a Play. The award was presented by Encore, which reviews all of the professionally staged plays in the state of Michigan.

A resident of Grosse Ile Township, Ewbank was among seven nominees for the title. More than 230 professional shows were considered for awards in 30 categories, as well as four special awards.

Ewbank’s award was for her performance in the title role in “Emile: La Marquise Du Chatelet Defends Her Life Tonight” at the Open Book Theatre in Trenton.

The play revolves around an 18th century scientist known for furthering the work of Newton and Liebniz, as well as being Voltaire’s lover and muse.

“I learned so much playing Emilie,” Ewbank said, “about her and about myself. She fought for her rightful place at a table in a field dominated by men.”

Ewbank also was nominated for the award in 2017 for her role in “Boy Meets Girl.” She holds a degree in theater from Northwestern University and worked professionally across the country before returning to Michigan and founding the Open Book Theatre Company in Southgate in 2014.

The award winner has served as the drama director at Grosse Ile High School since 2016 and will again direct the Grosse Ile Boar’s Head Festival during the Christmas season.

A World War I exhibit and photo project titled “The Great War and Its Local Connection” will open Sept. 15 at the Lincoln Park Historical Museum and continue through Veteran’s Day, Nov. 14.

The exhibit was planned to coincide with the centennial anniversary of the declaration of the Armistice, or cease-fire, at the 11th hour on the 11th day of the 11 month.

It will highlight local residents who served in the conflict, known as the Great War, between 1917 and 1919, when much of the Downriver area was part of rural Ecorse Township. Lincoln Park became a village in 1921 and four years later incorporated as a city.

Jeff Day, museum curator, said that many of the men in the community who had served in World War I came here during this growth period, and a few later, in the early 1930s, founded Lincoln Park’s two veterans chapters. American Legion Post 67 and VFW Post 552 are seeking photographs of local military service personnel for use in the exhibit.

“We are able to digitally reproduce any photos submitted and will return the originals to families,” he said. Day is accepting calls about the exhibit at 313-386-3137.

He said that although the focus is on the local connection, the exhibit will include a number of original war-era artifacts from the museum’s military collection and others on loan from private collections, many rarely put on display.

The museum also is working with local organizations and schools in an effort to identify current residents’ ancestors who had served during the Great War.

In conjunction with the display, the Lincoln Park Historical Society will feature a discussion on the city’s early war veterans and the two veterans’ chapters at 7 p.m. Oct. 3 at the Historical Museum. Taking part in the program will be John McElmeel of VFW Post 552 and Tracy Kirkendall of American Legion Post 67.

At 2 p.m. Nov. 3, Elizabeth Clemens, author of “Detroit in World War I” will speak on Detroit’s role in the war, its industrial contribution and the war’s effect on the Detroit Community.

In addition, Lincoln Park Mayor Tom Karnes will read excerpts from the World War I diary kept by his grandfather, Walter P. Gaffigan of Detroit, who served with the 37th Division, G Company of 112th Ammunition Train. The division was sent overseas in June of 1918 and fought at the Meuse-Argonne at Ypres-Lys offensives.

On Nov. 11, the Historical Society and Museum will host a public ceremony in remembrance of Americans who lost their lives in the conflict and those who served in the Great War and have since died.

The ceremony is scheduled for 10:45 a.m. on the museum lawn, followed by the tolling of the old Goodell School bell, just as it was in 1918, Day said. The museum is at 1335 Southfield.