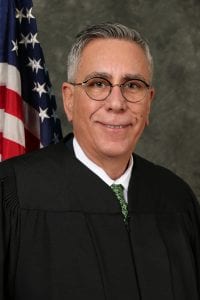 “I take seriously the faith the Michigan Supreme Court has placed in me by their appointment,” Hunt said. “It’s an honor to serve the city that I was raised in. In this new position I will oversee the services provided by our court and I remain committed to helping people navigate the court system.

“I thank Judge (Sam) Salamey for his years of service as chief judge and will work with him, Judge (Mark) Somers and court administration to continue to provide the quality services customary at the 19th District Court.”

Hunt was elected to Wayne County’s second largest district court on Nov. 8, 2016, and has been on the bench for two years. Hunt, a Marine Corp Veteran, established the 19th District Court’s Veteran’s Treatment Court. He serves as its presiding judge and provides leadership to the treatment court team and plays an integral role in guiding participants through the program.

As a judge, Hunt is known for his work on the bench and his civic involvement. Hunt grew up in Dearborn. After serving in the U.S. Marine Corps, he returned home and attended Henry Ford College and the University of Michigan-Dearborn. He graduated from Wayne State Law School in 1985 and spent his entire legal career in Dearborn.

He is a member of the Dearborn Exchange Club, the Optimist Club, American Legion, Marine Corp League and the Dearborn Allied War Veterans Council.