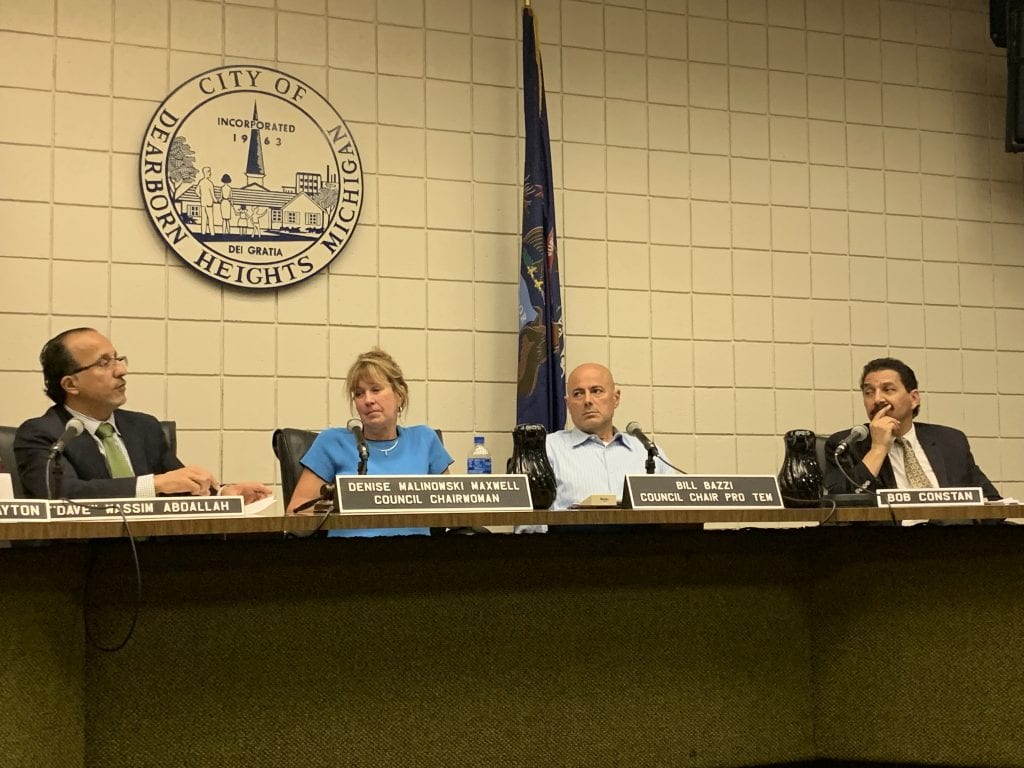 During a special meeting July 24, the council voted 5-2 on the resolution, which was opposed by Councilmen Dave Abdallah and Robert Constan.

The resolution authorized the retention of Ottenwess, Taweel & Schenk, PLC “as special legal counsel of counsel to the corporation counsel and to authorize the firm to file actions necessary and retainer agreement.”

A few of the fixes made to the resolution were that the law firm was not going to be compensated for first lawsuit filing and court date, any invoice or bill regarding legal fees must come before the city council for approval before payment is given, and that Council Chairwoman Denise Malinowski-Maxwell is not the sole decision maker for the council on implementing the resolution.

Instead, when something needs to be addressed pertaining to the lawsuit, Malinowski-Maxwell will move forward as a spokesperson for the council based on its decision as a whole after holding a study session.

During the council’s July 23 meeting, Corporation Counsel Gary Miotke said the council should hold a closed session to speak to their attorneys about understanding full ramifications to an appeal, cost and possibility of winning and losing in court.

City council did not vote on the resolution at that meeting, and instead agreed to hold a closed session followed by a special meeting July 24.

“The proposed retainer agreement is for two years which extends beyond this council’s life and there is case law that basically says that when a council is hiring someone, that it should not extend beyond the life of that particular council,” Miotke said. “Beyond that, I would also note that there’s the concern that I’ve raised before that this resolution would authorize the council chair to act and take all actions on behalf of the city council with regard to implementing the resolution.

As I have stated before, this would violate the city charter and the Open Meetings Act by delegating the city council’s power to the council chair. It also exposes all city council members to potential civil and criminal liabilities.”

Paletko said the fastest way to have an audit is to use Plante Moran because the city has a working relationship with the firm.

“They just went in and did an audit in the city of Troy,” he said. “I find it very interesting that — what is the big thing of this particular law firm? It keeps getting brought before and they need to do this work and nobody else can do it. I think it’s very suspicious, I find it very suspicious.”

He also added, “the accounting firm — and I don’t want as a CPA to make a necessarily a negative comment that the Rehman Group who Ottenwess, Taweel & Schenk wants to hire as the auditors were the auditors in Troy when all the scandal broke. Plante Moran is going in to clean it up. We’ve got one of the best, if not the best, auditing firms auditing Dearborn Heights. Most of questions council and people have could be asked to the auditors we currently have and get answered without the attorney fees.”

Malinowski-Maxwell said Plant Moran can’t be used because it’s a conflict of interest, which Paletko said was not true and that they’re independent auditors.

The council has 21 days as of July 17 to appeal the ruling made in Paletko’s favor regarding the original retainer agreement by Wayne County Circuit Court Judge Muriel Hughes on that date.

Attorney Matthew Schenk of Ottenwess, Taweel & Schenk told the council they should amend their regular meeting schedule to ensure they can override a veto that Paletko may make to file the appeal in the required amount of days.

That motion passed unanimously and a meeting was set for 6 p.m. July 30. Paletko has until July 29 to include a veto on the meeting’s agenda.

In the July 17 opinion, Hughes ruled that Paletko was not required to sign the contract authorizing Ottenwess, Taweel & Schenk, PLC to find an audit firm to complete a forensic audit. Hughes ruled that the council does not have the authority to hire an outside law firm when Miotke is employed by he city to provide legal assistance.

During an April 9 council meeting, Miotke spoke before the council voted, saying that if the two agenda items relating to appointing the law firm were adopted they would violate section 5.13 of the city charter. He added that the charter section does not provide for any designated general legal counsel to the city council.

The council first voted Feb. 26 on a resolution to seek a forensic audit to provide an explanation for almost $1.4 million missing from the city’s Public, Educational and Governmental fund.

Circuit Court Judge Muriel Hughes ruled May 7 that Malinowski-Maxwell could not sue Paletko on behalf of the entire council and that a vote to approve the lawsuit would have to take place first.

At the May 9 special council meeting, the council voted 4-2 to file a complaint against Paletko after he refused to sign a contract approved by the council to conduct a forensic audit.

The council voted for the second time May 14 to override Paletko’s veto of the resolution the council approved to file a complaint against him after he refused to sign a contract allowing for a forensic audit. During that meeting, the council voted 5-2 in favor of the motion with Abdallah and Constan opposing.

The motion vetoed by Paletko approved the resolution to authorize the law firm of Ottenwess, Taweel & Schenk, PLC to file a complaint of writ of mandamus against the mayor.

The council voted 5-2 April 9 to override Paletko’s veto of the appointment of the Ottenwess, Taweel & Schenk PLC law firm for a forensic audit.

Before the veto, the council again voted 5-2 to reintroduce the law firm appointment resolution for possible reconsideration. The retainer agreement also was passed 5-2 after the override. All three votes were opposed by Adballah and Constan.

All council meetings and study sessions are available on YouTube under the City of Dearborn Heights page.