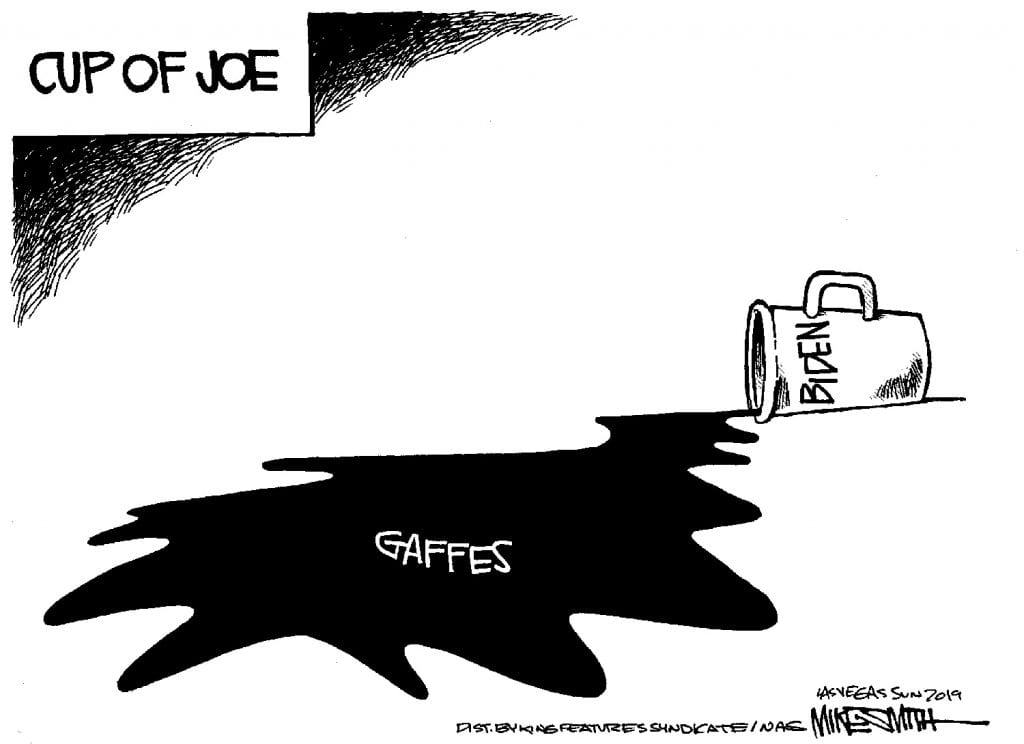 When Joe Biden says he’s running for president, he means it literally. He likes to be seen jogging around at his various campaign events.

Obviously, that’s his way of showing that at 76, he’s not too old for the grueling physical and mental challenges of being POTUS. But it does raise a question: Is he aware that the bigger problem is his running off at the mouth?

Now, this is not a new concern. Joe Biden, after all, taught us what a “gaffe” was — he’s been at it for a generation. He describes himself as “a gaffe machine,” tripping over his comments since at least 1987, during his first presidential campaign, which ended after he was caught repeatedly plagiarizing the speeches of a British politician.

Over the years he has been a constant source of laughter. In the greatest hits of Biden classics there was this one, from 2007, describing Barack Obama: “I mean, you got the first mainstream African-American who is articulate and bright and clean and a nice-looking guy. I mean, that’s a storybook, man.”

In 2008, he bounded onto a stage with this gem: “I’m told Chuck Graham, state senator, is here. Stand up, Chuck; let ’em see you. Oh, God love you. What am I talking about? I’ll tell you what, you’re making everybody else stand up, though, pal.” Chuck Graham was confined to a wheelchair.

Joe is still at it, telling people during a recent speech in Iowa: “We have this notion that somehow if you’re poor, you cannot do it. Poor kids are just as bright, just as talented, as white kids.” He then had to untangle his tongue and get it right.

So Biden has been mangling his language for a long time, but now it’s no longer funny. No one is cutting him any slack, wondering if his missteps really mean he’s lost a step.

Even President Donald Trump is waiting to pounce. He told reporters after the latest from Biden: “Look, Joe is not playing with a full deck.” Somehow, at 73, Donald Trump feels like he can play the ageism card.

Interestingly, he’s gaffe-prone himself. Who can forget this gem from his recent July Fourth salute to himself: “The Continental Army suffered a bitter winter of Valley Forge, found glory across the waters of the Delaware and seized victory from Cornwallis of Yorktown,” said Trump. “Our army manned the air, it rammed the ramparts, it took over the airports, it did everything it had to do.”

The Continental Army taking over airports in 1777 was just another of the Trumpster’s flights of fancy, but the issues with Trump are far more serious than his mistakes. It’s his intentional rhetoric; the relentless racism, the intentional lies, that are no laughing matter.

Also serious is a discussion about how old is too old, about the advantages of long experience versus the disadvantages of age. It would be useful to avoid sweeping assumptions. Some are impaired as the years go by, but some are sharp as a tack. Generalizing would be ageism.

In any case, let’s face it — a Trump-Biden contest would be a gaffe-laugh a minute. That would end up being a welcome distraction from the inevitable hatefulness and deceit that will make the upcoming campaign one for the ages — the Dark Ages.