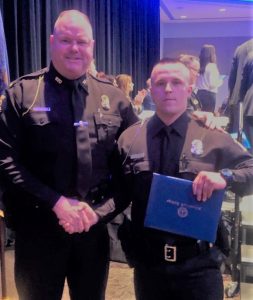 WYANDOTTE — A man in a vehicle who appeared to be casing a convenience store at 1:52 a.m. Feb. 2 was arrested for a minor vehicle offense which led to the discovery of a firearm used in an earlier robbery.

Police Officer Aaron Worley noticed a vehicle parked a few hundred feet from the Circle K at 540 Goddard in the early morning hours, and when the person drove away, he initiated a traffic stop for a defective license plate lamp.

As the police officer approached the vehicle, he noticed the driver making furtive gestures, as if hiding or reaching for something. Worley commanded the man to show his hands, then exit the vehicle, after which he was handcuffed, and the gun discovered.

The man was arrested for driving on a suspended license and providing false information to a police officer, and faces felony charges related to the earlier armed robbery in which the firearm was used.

“I think about the innocent clerk working the night shift, who had no idea what was taking place outside,” he said. “The actions taken by this officer prevented the clerk from experiencing a traumatic event or worse.”