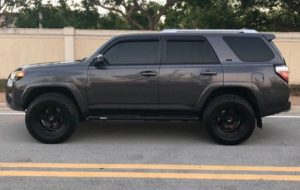 MELVINDALE — A road rage incident the afternoon on Feb. 10, near Schaefer and Greenfield roads, dissipated before anyone was hurt.

Two adults with children in a black Ford Edge said a man driving a gray Toyota 4 Runner cut them off, and then, when they continued in the same direction as him, he rolled down his window, yelled something, then pulled over, and the occupants of the Ford Edge pulled over behind him.

The Toyota driver, a heavy-set, bearded man, got out and approached the male passenger of the Ford. He reportedly said, “I got something for you,” then returned to his vehicle and started backing up toward the Ford, before making a U-turn and driving away in the opposite direction.

The people in the Ford then drove to the Melvindale police station to report the incident. The Toyota driver called 911, but did not drive to the station as requested to file a statement.