(Editor’s note: This article is part of Inside Our Outdoors, a series about Southeast Michigan’s connected parks, greenways, and trails and how they affect residents’ quality of life. It is made possible with funding from the Michigan Trails and Greenways Alliance.)

The LRG is a non-motorized trail that runs between Canton Township and Dearborn following a portion of the lower branch of the Rouge River. Overseen by Wayne County Parks, the project is part of a larger initiative called Connecting the Rouge that aims to link communities along the Rouge River with access to existing and planned trails.

Although only patches are completed at the moment, the finished trail will run about 14 miles through the communities of Canton, Wayne, Westland, Inkster, Dearborn Heights and Dearborn. Plans call for most of the trail to be paved with asphalt, though some completed sections in Canton have been made with crushed stone.

As with many projects over the last year, COVID-19 has caused some hiccups with the effort to complete the greenway. But Elizabeth Iszler, chief of planning and design for Wayne County Parks, says her agency has been taking the challenges in stride.

“From a county standpoint, the pandemic definitely slowed things,” she says. “We just kind of switched gears to go more into planning mode and then construction.” 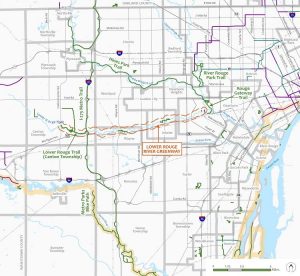 In 2021, the main focus for Wayne County will be completing the design of new trailheads at Venoy-Dorsey Recreation Area in the city of Wayne. They’ll be located on opposite sides of the park, with one on Venoy Road and the other on Merriman Road.

Along with the trailheads, the county will also install new kayak and canoe launches at each site, as part of a related project called the Lower Rouge River Water Trail. Wayne County Parks staff hope to begin construction on the trailheads and launches by this fall.

Planning is also underway to build a mile-long section of the greenway between the two trailheads, an undertaking supported by an MDOT Transportation Alternatives Program grant. The expansion of the trail there is expected to kick off next year.

Construction of the LRG is the result of collaboration between the county and communities along the trail. The project started taking shape roughly a decade ago, when Canton began installing trails in its community. Around that time, the city of Wayne also began work on its own non-motorized trail. Then, a few years ago, the county began to ponder the idea of joining efforts like these into a more comprehensive network.

“Wayne County Parks identified trail systems as a priority in their 2017 Strategic Master Plan,” says Izsler. “Based on community input and internal planning, the Lower Rouge Greenway was identified as a critical trail system to add to the park system.”

In 2019, Wayne County Parks received a planning grant from the Southeast Michigan Council of Governments to help map out an entire trail system. That design is now being used to apply for funding for other sections of the trail.

As a result of this planning, the LRG has also been incorporated into the county’s Connecting the Rouge initiative, which is funded by the Ralph C. Wilson Jr. Foundation and supported by the Friends of the Detroit River. Under this initiative, the county plans to connect the LRG with trails on Hines Drive, which follows the middle branch of the Rouge River, and downriver portions of the Rouge River Gateway Greenway.

The county believes the project will spur economic growth and connect local communities to larger state and regional non-motorized networks like the Iron Belle Trail, I-275 Metro Trail, and ITC Corridor Trail.

At the moment, 5.1 miles of the LRG have been built: 1.1 miles in Inkster, 1 mile along Mill Trail in Wayne, and three miles between Canton Center Road and Morton Taylor Road in Canton Township.

Next on the horizon for the LRG after the new mile of trail in Wayne, will be an expansion of Canton’s trail. The township is currently designing its final section of the trail system between I-275 and Hannan Road. That segment will span about a mile and will incorporate two bridges. A timeline has not yet been set for when that construction will take place.

(This story was reprinted from Metromode Media. It also is available here.)