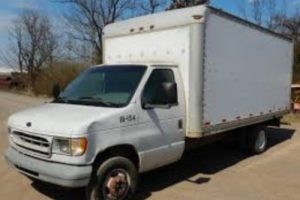 DEARBORN — Thieves got more than they bargained for Feb. 23 when they attempted to steal a work truck from a local business, abandoning it a few blocks away when they discovered the brakes didn’t work.

A representative of Escobar’s Rugs, 6606 Greenfield Road, said the 2000 Ford Econoline box truck was stolen overnight from the business parking lot, where broken window glass was discovered on the ground where it had been parked. He said he had recently purchased it used, and while he had the key, he had not yet insured it or transferred the title.

Upon investigation, the truck was found abandoned five blocks away, near Paul Avenue and Forrer Street in Detroit. The front driver’s side window had been shattered, and there were tool marks around the window weather stripping. The ignition was punched, and there was fresh body damage on the truck’s rear passenger side.