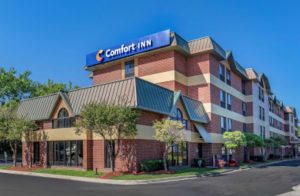 DEARBORN — A Detroit woman was banned from Comfort Inn, 20061 Michigan Ave., after she refused to leave the hotel Feb. 27 when her room deposit was not refunded due to damage to the room.

A hotel official said the woman exceeded the room capacity, wrapped a plastic bag around the smoke detector and left ashes on the floor of the room, which smelled heavily of smoke upon her departure, in violation of the room contract she signed upon arrival.

The woman had been given a phone number to appeal to the corporate office before police officers arrived, but she remained argumentative and slow to leave the site. Because of her agitation, the official asked police officers to tell her that she was henceforth banned from the premises.