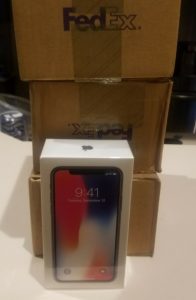 DEARBORN — A FedEx driver delivering a package with two iPhones April 2 in the 2700 block of Academy Street told the resident that a person down the street tried unsuccessfully to intercept the package.

The resident told police officers that he did not order the cell phones, which he returned to AT&T. He said he did notice a black male in a red sedan circling the block shortly after he received the package. He was advised to call the detective bureau if he had anything further to add.