RIVERVIEW — Riverview Firefighter Chris Davenport and his wife Suzette Davenport are in a Florida hospital recovering from surgery after a motorcycle crash May 2.

The couple was returning home from their vacation when a vehicle pulled out in front of them and they were forced to lay down their bike, a GoFundMe page read.

Both were airlifted to a hospital trauma center in Miami due to the severe injuries they suffered. An update from Chris Davenport was posted May 5 by the fundraiser organizers Ted and Ashley Copley.

Chris Davenport said his leg below the knee was amputated as a result of the accident. He also said the doctors hoped to save Suzette Davenport’s leg, but after seeing the damage, they determined she would have a lifetime of pain and probably would have no support on her leg.

Suzette Davenport was scheduled for an amputation below the knee May 5.

“The pouring of support has been simply amazing!!!” the post read. “Even from people we have never met and those that saw the accident. In fact, I want to give a huge thank you to the bystanders that not only helped us, and stopping the other driver from pulling away.” 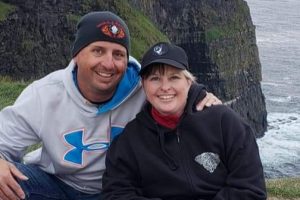 As of May 6, the page raised $54,313, exceeding the initial $50,000 goal set. The Davenports have insurance, but according to the GoFundMe page, their medical bills are still anticipated to be “astronomical.”

All donations received will be distributed to the Davenport family through the Grosse Ile Firefighters Association and Goodfellows. To donate go to https://gofund.me/b836cdfc.

During a May 3 Riverview City Council study session, Fire Chief Ronald Lammers said it was a very devastating day for the department.

“One of our members last evening — he and his wife while vacationing down in Florida — were involved in an auto-motorcycle accident,” he said. “I did speak to the firefighter’s daughter earlier this evening, they are expecting to try to get down there a little bit later this week to see what additional things that they may be able to help with down there.”

He continued by saying that the good news was that the Davenports survived the crash and are in pretty good hands with the team they have at the hospital.

“They’re in ICU currently, we have no idea as to when they will be stabilized enough to be brought back home. I have been in contact with a couple other chiefs in the area as well as one of the doctor’s here at the hospital trying to see if we might in advance facilitate travel arrangements for them — when and if that time comes available,” Lammers said.

A regular council meeting followed the study session where Mayor Andrew Swift asked everybody to keep the couple in their prayers.

“We had a firefighter and his wife involved in a serious accident,” he said. “They have a long road ahead of them but we all know the power of prayer, and if everybody can keep them in your prayers, hopefully they’ll get back home soon.”