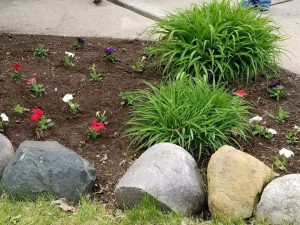 SOUTHGATE – Volunteers spruced up the exterior grounds of the city’s schools May 15, with Southgate Rotary members focusing their attention on Asher School, an alternative high school at 14101 Leroy St.

“The idea was to improve the curb appeal of each of the buildings, addressing the area around the entrances to the schools,” Kuspa said.

He said the volunteers weeded, trimmed trees and shrubs, and planted donated flowers.

Kuspa and his wife, Kim, and daughter, Zoey, were among the volunteers at Asher School, along with 28th District Court Judge Elisabeth Mullins.

“The event was a great success, and I commend Superintendent Irvine for initiating and organizing this effort,” he said. “A special thank you to the numerous groups and volunteers who participated.”

Stephen Ahles of the Southgate Rotary Club said the first phase of the school exterior cleanup was a success.

“Southgate Schools wanted to raise its profile, to attract new students, and that is difficult when schools look like they are abandoned because of overgrown and neglected flower beds,” he said. “By giving schools a face lift, we show, on first impression, the commitment to excellence that exists inside the school.”