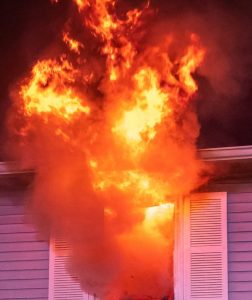 SOUTHGATE — A Southgate police officer who was the first person on the scene of a house fire at 3:53 a.m. June 23, in the 13000 block of Argyle Street, extinguished most of a back porch fire using a fire extinguisher from his patrol car and a neighbor’s garden hose prior to the arrival of Southgate firefighters.

The ignition source appeared to have been a defective floodlight, which had been mounted to a back porch post. The hot floodlight ignited a second, minor fire on the ground, where it dropped after igniting the initial porch blaze.